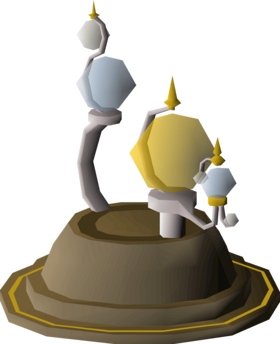 The large orrery in motion.

A Large orrery can be built in the Globe space of the Study in a player-owned house. It requires 95 Construction to build and when built, it gives 1,420 experience. The player must have a hammer and a saw in their inventory to build it.

The orrery shows Gielinor (with Zanaris in orbit) rotating around a star in the solar system. There is a second planet, with two moons, between Gielinor and its star.