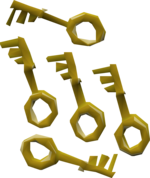 Larran's key is a key obtained from killing monsters while on a Slayer task given by Krystilia. It is used to open Larran’s small and big chests.

The exact odds of receiving the key scales with the monster's Combat level. For levels 1-80, it follows a curve between 1/1972 at level 1 to 1/100 at level 80 calculated as shown in fig.1.[1] For levels 81 or higher, the odds are between 1/99 and 1/50, scaling linearly and capping at level 350 as shown in fig.2.[2] In addition, if players are assigned to kill slayer monsters, the drop chance is increased by 25%,[3] and any monsters killed within the Wilderness Slayer Cave have a further 15% increased chance to drop a key.[4]

Where P is the probability of getting a key and L is the monster's combat level.

While untradeable, the killer will be able to receive the key upon killing their opponent. If the killer is an Ironman, the key will be automatically destroyed.