Last Man Standing, commonly referred to as LMS, is a player-versus-player battle royale style minigame in which the player, along with 3-23 others, are transported onto an island where they must fight for survival, killing each other and looting any items they can to become the titular last man standing.

Players can begin the minigame by speaking to Lisa, located in Ferox Enclave. Items cannot be brought into the minigame; any items in the player's possession are temporarily taken away for the duration of the game, and are returned upon leaving the game. Alternatively, a bank deposit box near Lisa can be used to deposit all of the player's items. 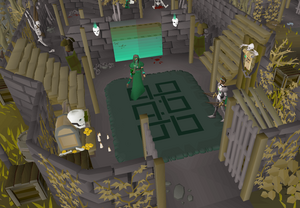 Upon speaking to Lisa, players will be given the choice to participate in one of three game modes:

Unlike most minigames, Last Man Standing can only be played on certain worlds. It should be noted that there are no differences in gameplay between free-to-play and members, as the items used within the minigame, which includes various equipment usually exclusive to members, cannot be brought outside. This makes the minigame the only place where free-to-play players can perform special attacks with the weapons provided and use Ancient Magicks.

As with other PvP worlds, Last Man Standing worlds are often rotated to provide fairer lag to players across the world. The current active PvP world rotation is Rotation A.

At the start of the game, a map is chosen from the map pool at random. Currently there are two island maps available (Desert Island and Wild Varrock), with a 50% chance of either being chosen.

Upon arrival to the island, an account build is randomly chosen for all players, with a higher chance given to builds preferred by more players in the waiting area. All prayers (excluding Redemption, Smite, Preserve and Retribution) can be used, and the player's spellbook is switched to the Ancient Magicks, even if Desert Treasure is not completed. In addition, players are given infinite run energy as well as infinite prayer. Once the player arrives, the game will begin in 12 seconds.

Upon killing a player, the player's stats, run energy, special attack and supplies are all replenished. Players will also receive a bloody key (or a bloodier key if there are fewer than five players), which they should use on a chest to receive more powerful equipment. During this time, players are also unattackable for 20 seconds, giving them time to find a chest to loot as well as preparing for the next fight against another player.

Items found within the island have different item IDs than their normal counterparts. If players somehow were able to smuggle them outside the minigame and attempt to use them, they will disappear instantly. 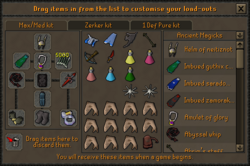 Players can arrange their inventory and equipment loadout at the supply chest near Lisa.

Players are given a default preset of items based on the account build chosen that are provided upon arriving, which by includes Super restore, Super combat potion, Saradomin brew, Ranging potion, and, by default, a unique rune pouch that can cast Blood Blitz, Blood Barrage, Ice Blitz and Ice Barrage. The supply chest just east of Lisa allows players to arrange their inventory, equipment loadout, and spellbook to their personal preference. It should be noted that players cannot have more than eleven sharks and two cooked karambwans for their loadout, and cannot be picked up from a slain player's loot if they have that same amount of food. Players can choose between the Standard Spellbook, Ancient Magicks, and Lunar Spellbook in the supply chest, giving access to the Surge spells and Entangle, Ice and Blood Blitz and Barrage spells, and Vengeance and Cure Me respectively. The Lunar Spellbook cannot be activated for Pure builds.

To improve the chance of survival, players must loot chests throughout the island with bloody keys and bloodier keys. Chests opened with bloody keys will roll for an item from two loot tables, one of which contains offensive gear, and the other defensive, while bloodier keys access an upgraded offensive loot table. If an opponent logs out before they are killed, the attacker will still receive a bloody/bloodier key. 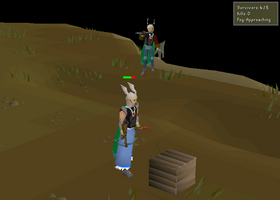 A loot crate that occasionally spawns in a broadcasted location.

There will also be loot crates that may spawn throughout the map; the chat box will broadcast its location to all remaining players. These loot crates can roll on the upgraded loot table.

Below are lists of equipment that can be obtained during the minigame for each account build. 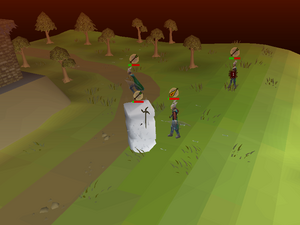 The fog begins to settle in, damaging any player in its vicinity.

After a minute, the game will broadcast that lethal fog will soon fill the island, and the safe zone that players must travel to, in order to avoid damage from the fog, which will be indicated by fog markers (appearing as glowing orbs) and a yellow arrow.

Players who aren't in the safe zone after 9 minutes and 10 seconds will take rapid damage, beginning at approximately 1 damage per tick, but steadily increasing to 10 damage per tick.

In competitive games, players are given a certain amount of points based on their performance in a game:[2]

Note: Players must kill at least one player before being awarded any points.

These points can be exchanged for reward items at Justine's reward shop, Justine's stuff for the Last Shopper Standing. Each point is worth up to 58,670.00 for members or 28,073.00 for free-to-play.

For high stakes games, the sole survivor of the match will win 7,500,000 coins and the runner-up is awarded 2,500,000 coins, which is put into a chest near Justine where it may be claimed anytime by the player. For players in third to fifth place, they will have their next high stakes game free of charge.

Since a minimum of 24 players are needed to enter the game, 12,000,000 coins are put into the match. 10,000,000 of that are redistributed to the last two players and three players get free access to their next game, removing 1,500,000 coins that are put into a single match, meaning that Last Man Standing acts as a money sink with a minimum of 500,000 coins leaving the game per high stakes match.

Players have a rank that starts at 500, and can decrease, increase, or stay the same depending on their performance each game. 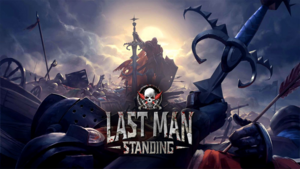 A piece of artwork of the minigame.