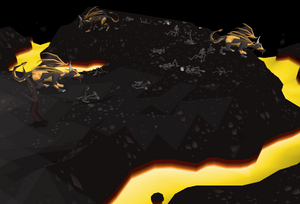 Lava Dragon Isle is a members only location that stretches from level 36 to level 42 Wilderness. It is a multi-combat area and is home to several lava dragons. The landscape is even more charred than the wilderness around it, and dragon eggs sit on the ground in various spots. Killing the lava dragons and collecting their drops can be very profitable, making this area a hotspot for both money makers and PKers.

However, there are safespots if players wish to train on the dragons using ranged attacks or Magic attacks or with a halberd, and there are white berries there that respawn very quickly, which players may collect and sell for a decent profit. An Anti-dragon shield is a must if players wish to visit this deadly part of the wilderness.

A shortcut at the bottom of the isle can be found, requiring 74 Agility and completion of the Wilderness hard diary to use. This can be great when needing to escape from PKers when fighting inside the isle if they cannot use it.