The Lava Maze Dungeon is a dungeon beneath the Lava Maze in high level Wilderness. The dungeon is entirely single-way combat and has two ladder entrances.

The dungeon's western entrance is west of the Lava Maze, level 42 Wilderness in a metal fenced area containing lesser demons. This entrance leads to a small area containing only poison spiders and the lever to enter the King Black Dragon's lair. This part of the dungeon covers level 42 to 43 Wilderness.

The dungeon's eastern entrance is in the centre of the Lava Maze, level 42 to 43 Wilderness in a metal fenced area. This entrance leads to an area containing more monsters and a single Runite ore rock. This part of the dungeon covers level 41 to 47 Wilderness.

Players who are on a black dragon or greater demon Wilderness Slayer task given by Krystilia may opt to kill them here as their other locations in the Wilderness are multicombat areas. However, it is only recommended to do so with completion of the hard Wilderness task set and 82 Agility given the massive distance and lack of a bank in the area. 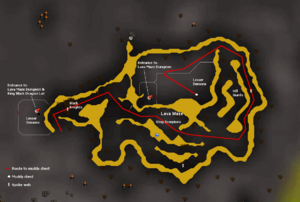 The path to the dungeon.