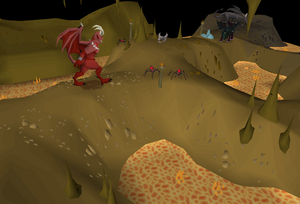 Once players enter the eastern entrance, they will be in the dungeon's western side. A single runite rock can be found here. However, the mine is extremely dangerous as several greater demons wander the dungeon, and two black dragons can also be found nearby. The dragons can easily be trapped behind the rock, but players will likely be attacked and poisoned by the poison spiders wandering near the rock. With some manoeuvring, however, the spiders can be trapped behind stalagmites. As well as this, due to being located in the Wilderness, players may attack and kill each other here.

The Lava Maze Dungeon mine was originally one of very few areas where runite ore could be mined. Since its addition to the game, however, several new runite mining areas have been released, such as the Central Fremennik Isles mine. Newer mines are generally located more conveniently and are comparably less dangerous, leading to the Lava Maze site's relative emptiness.