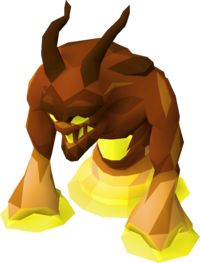 Lava beasts are found within the Volcanic Mine on the Fossil Island Volcano. They attack players in the mine, and are weak to water spells, which they take double damage from. Using the Protect from Missiles prayer will reduce their max hit to 1.

Their attacks can damage multiple players at once, similar to chinchompas or barrage spells. The damage of the attack is calculated shortly before the projectile lands rather than when the attack animation starts, unlike most other monsters, giving players a chance to see their attacks coming and pray accordingly.

Players who attack them will be awarded with 1 Volcanic Mine point for every 10 damage their attack dealt, with a bonus of 3 points for dealing the final blow. However, players will find that focusing on mining the boulder provides more points faster.