Lava dragons are former red dragons that have been transformed after being surrounded by lava for too long. They reside in the Lava Dragon Isle in the Wilderness (between level 36 and 42 Wilderness), and attack with melee as well as with dragonfire. Due to their low magic level, they are particularly weak to magic, thus making Fire Bolt a slow but profitable method of killing them.

Lava dragons can be safespotted both inside and outside their isle. The many piles of skeletons and edges at the isle allow for players to safespot them inside. Alternatively, players can camp some of the southern spawns outside the isle, although they should be careful as Vet'ion can walk to their safespot and attack the players. Having 74 Agility and the hard Wilderness Diary completed is recommended when killing them to use the stepping stones to escape the isle, as the area is frequented by player killers.

Bringing a pestle and mortar is optional to grind the scales into shards, in addition to High Level Alchemy runes to alch their common adamant and rune equipment drops. If killing them from outside the isle, Telekinetic Grab will be needed to grab their drops. Although it is possible to stay at the isle indefinitely using this method, it is advisable to bank every 10–20 minutes as the isle is commonly targeted by player killers.

Although they drop black dragonhide, they do not count as black dragons for a Slayer task. 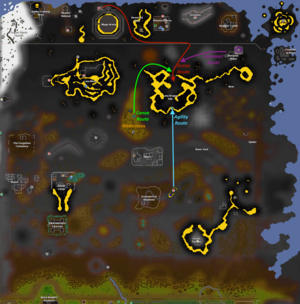 There is a 5/128 chance of rolling the herb drop table, and is rolled twice. The displayed drop chance represents a single roll.