From Old School RuneScape Wiki
Jump to navigation Jump to search
The RuneScape Wiki also has an article on: rsw:Leaf-bladed sword 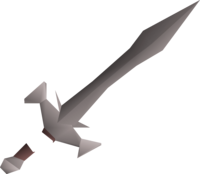 The sword requires an Attack level of 50 and a Slayer level of 55 to wield. It is a good alternative to the leaf-bladed spear as it attacks faster, has higher slash and stab bonuses, and is one-handed, enabling the use of a shield or defender if desired.

It is dropped by turoths and kurasks, both located in the Fremennik Slayer Dungeon.

Unlike the leaf-bladed battleaxe, the sword does not have a 17.5% damage and accuracy buff against turoths and kurasks and, though faster, has much lower stats, so players with an Attack level of 65 are greatly encouraged to use the axe over the sword.

The dragon scimitar is one of the most popular weapons in RuneScape; it is a fast, one-handed weapon with decent strength and accuracy. Scimitars are also considered to be much better than regular swords of the same metal. For example, rune scimitars are better than rune swords in both accuracy and strength but equal in speed. The leaf-bladed sword is considered a good substitute for the dragon sword. It has a lower strength bonus than the scimitar just as it is with other metals, but the attack bonuses are identical, making the leaf-bladed sword more useful in certain circumstances than other swords would be.

If slash must be used, another weapon such as a dragon scimitar or an abyssal whip would be preferred.