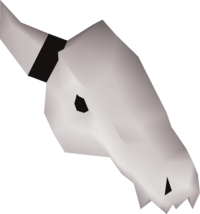 The skull half looks like half of a minotaur skull, while, oddly, the right half would look more like an ankou's skull, and is dropped by minotaurs, possibly indicating fighting between the two monsters.

Skull sceptre pieces can be crushed with a chisel to yield Bone fragments, or combined to a Skull sceptre (i) to add to its current charges. When chiseled, the left skull half will provide a base quantity of five bone fragments, increasing by one for each Varrock diary tier the player has completed.