The Legends' Guild is the second most exclusive of the quest-based guilds in Old School RuneScape (with the Myths' Guild being the first). It is located to the north-east of East Ardougne, east of Hemenster and the south of Seers' Village. To enter the grounds of the Legends' Guild, players must have started the Legends' Quest. However, to enter the actual building, players must have completed the entire quest. Radimus Erkle is the headmaster of the guild, and he is also the start point of the Legends' Quest.

There are several ways to get to the Legends' Guild: 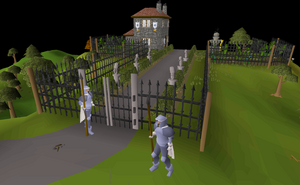 Entrance of the Legends' Guild

At the gates of the Legend Guild, there are two Legends guard on duty, only letting players who have started or completed the Legends' Quest go through the gates. If a player who is a member of the guild enters the gates the guards proclaim "Legends' guild member approaching!". A player who is currently doing the quest passing through the gates will result in the guards saying "Hope the quest is going well, [sir/ma'am]!".

Outside of the actual Legends Guild building is a small house where players can talk to Radimus Erkle and start the Legends' Quest. Opposite that is a fountain and the Golden Gnome statue. 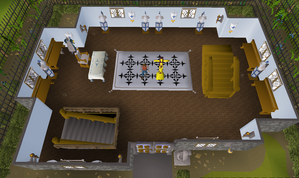 Radimus Erkle stands on the ground floor[UK]1st floor[US]. There is also the Totem Pole which was obtained through the completion of the Legends' Quest. The skills necklace and combat bracelet can be recharged at the totem. Doing this is a requirement for the Hard Ardougne Diary. 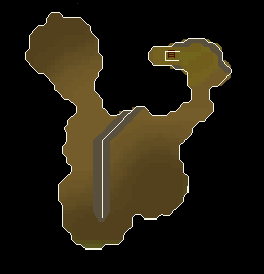 A map of the dungeon beneath the guild.

Downstairs is a dungeon which has giant bats, pit scorpions, and shadow warriors.

A Dwarf multicannon can be used.

Going up the stairs from the ground floor[UK]1st floor[US], on the next floor is Fionella who runs the Legends' Guild General Store. She will buy items from players at a higher price than normal general stores.

Players can reach the 2nd floor[UK]3rd floor[US] via a western and eastern ladder. Up the east ladder is a bank. Up the west ladder is Siegfried Erkle, who runs the Legends Guild Shop of Useful Items.