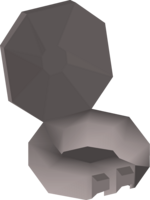 The mould must be given to the Observatory professor along with a piece of molten glass to make a new observatory lens for the telescope. He will be unable to make the lens and will return the mould and glass so the player can make it.