Leon d'Cour is the human Champion of Champions, and the last boss in the Champions' Challenge minigame. He can only be fought after all the other champions have been defeated.

Upon defeating the last champion, Leon d'Cour will challenge the player, telling them "You have done well brave adventurer, but I would test your mettle now. You may arrange the fight with Larxus at your leisure." The special rule in this fight is that the player cannot have any items in their inventory.

Once players defeat Leon d'Cour, he will exclaim "Adventurer, you have defeated me in battle! For this, I congratulate you. Please accept my cape as a sign of your accomplishment", and give players the Champion's cape.

Since no inventory items are allowed, players using melee should bring equipment with a high Prayer bonus such as proselyte armour or Verac's set and activate Protect from Melee as the champion hits accurately and hard with melee.

Leon is weak to Magic, however since runes cannot be brought to the fight, the only options to attack him using Magic are powered staves or a salamander. 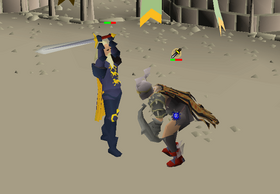 A player duels with Leon d'Cour, the Champion of champions. 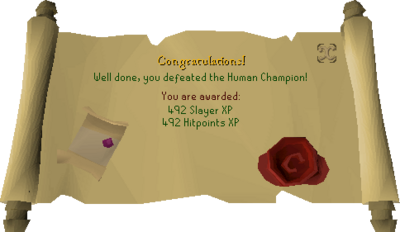