From Old School RuneScape Wiki
Jump to navigation Jump to search
The RuneScape Wiki also has an article on: rsw:Lesser Demon Champion

The banner hung after defeating the Lesser Demon Champion.

The Lesser Demon Champion can only be fought after receiving the lesser demon champion scroll as part of the Champions' Challenge minigame.

The special rule in this fight is that the player cannot use any equipment, including weaponry. This also includes bringing inside an imbued heart, however boosting before the fight is allowed. Players are also unable to bring fletching supplies (no materials to make equipment are allowed) or use thralls (the book of the dead counts as equipment).

Due to being able to only fight the champion unarmed, it is recommended to bring runes and prayer potions and cast demonbane spells from the Arceuus spellbook. Otherwise, the highest combat spell the player can cast will work as well. It is also possible to flinch if using melee.

Since the champion uses Magic and melee, the player should stay out of melee distance with Protect from Magic active as the champion will not close in to use its melee attack. The champion has high Magic defence; as such, the use of Magic potions and Magic accuracy boosting prayers is recommended. 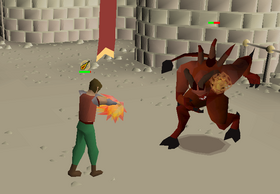 A player duels with the Lesser Demon Champion. 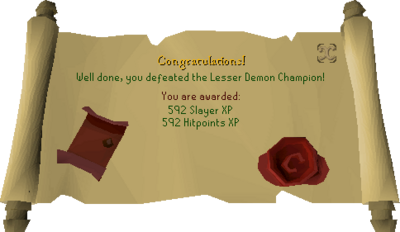