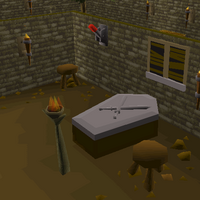 The lever south of Edgeville bank. 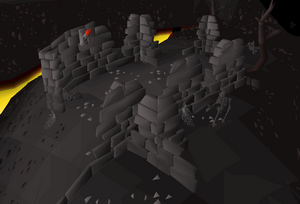 The Edgeville teleport lever is located in the southern section of Edgeville, just east of the yew trees and south of the bank. Like its twin lever in East Ardougne, it teleports the user to the Deserted Keep in the members' part of the deep Wilderness, after giving a warning (which can be turned off by talking to the Doomsayer).

After pulling the lever, the player will find themselves in the Deserted Keep. The Deserted Keep is close to places such as the Mage Arena and the Wilderness Agility Course, so the lever can be used to quickly access these locations.

The lever in the Deserted Keep teleports the player to Ardougne, not back to Edgeville, unless the player has completed the easy Wilderness Diary.

A knife or a slash weapon is required to cut the web on the northern part of the peninsula to leave the area.

It is only recommended that you use this teleport if you want to enter the Mage Arena, go player killing or want a quick, easy teleport to Ardougne.