The Library Historical Archive is small area within Arceuus accessible only by speaking to Archeio, the archive's guardian, on the Arceuus Library ground floor. The archive was previously closed off to visitors because there were many dangerous enchantments protecting it, but now that they have been isolated, visitors may freely enter and leave the archive.

The Library Historical Archive stores historical documents from all eras of Great Kourend's history, with the most important texts stored here for further study and protection.

Players can speak to Istoria, the chief historian and curator, to leave the archive.

Players can speak to some of the NPCs to learn more about a specific subject: 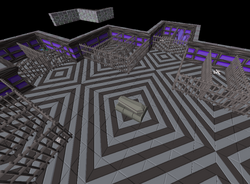 The appearance of the Tower of Magic's prison prior to the release of the Tale of the Righteous.
Retrieved from ‘https://oldschool.runescape.wiki/w/Library_Historical_Archive?oldid=13668059’
Categories:
Hidden category: