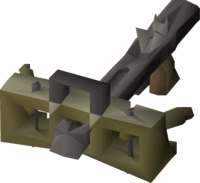 The light ballista is a two-handed ranged weapon that uses javelins as ammunition, requiring level 65 in Ranged to wield.

It is created by using ballista limbs on a light frame, then using the resulting incomplete light ballista on a ballista spring, and finally adding a monkey tail on an unstrung light ballista. The entire process requires 47 Fletching and grants 330 experience.

The speed on accurate is one tick slower than a godsword, but when put on rapid it matches the speed of a godsword. The ballista has an attack range of 9. Longrange increases attack range by 1.

The light ballista has a special attack, Concentrated Shot, which it shares with the heavy ballista. It performs an attack with 25% increased accuracy and damage and uses 65% of the special bar.