Light sources are used to illuminate dark caves and dungeons. Some of these areas are inaccessible or very dangerous without a light source.

Most light sources are items that require certain

Firemaking levels to be lit. However, there are also certain equipable and stationary light sources.

Consequences of no light[edit | edit source]

After spending 9 seconds in a dark area without light source, there will be a warning message and after 18 seconds (30 ticks), the message "Tiny biting insects swarm all over you!" is displayed in the chatbox. Starting with that message, 1 damage per tick will be dealt in quick succession, which cannot be blocked with protection prayers. The damage will stop upon leaving the dark area or igniting a light source.

Note: The 18 seconds timer can be reset by logging out, however, it is not possible to log out after being damaged, as it is considered in-combat.

Players cannot attack without a light source in dark areas but can still be attacked.

Unlit light sources may be lit by using a tinderbox on them. Torches may also be lit with dry sticks. Each lightable item has a certain

Firemaking level requirement to be lit. Players may use spicy stews to boost their level with up to 5.

Empty oil lamps, empty oil lanterns and empty bullseye lanterns have to be filled with lamp oil before they can be lit. Lamp oil is made by distilling swamp tar at either the lamp oil still in the Chemist's house in Rimmington, or the lamp still next to Miltog in Dorgesh-Kaan. 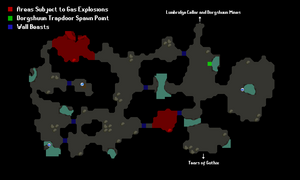 The areas where gas explosions can occur in the Lumbridge Swamp Caves.

Torches, candles and oil lamps will cause gas explosions in certain areas of the Lumbridge Swamp Caves, as the flames are exposed to the gas.

Upon entering such area with one of these light sources, a message is displayed in the chat box; "Your [light source] flares brightly!". After roughly 4.2 seconds (7 ticks) in the area, a gas explosion occurs, dealing 25% of your total Hitpoints in damage. The light source will then also be extinguished.

Constructing the Fire of Eternal Light (after the Making Friends with My Arm quest) in the swamp caves will disable gas explosions. It also functions as a light source throughout the caves.

Certain light sources do not have to be ignited, and may be equipped.