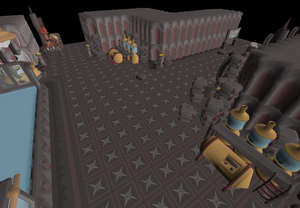 The Lithkren Vault is an underground research facility located in the ruins of a dragonkin castle on Lithkren. During the Dragon Slayer II quest, it is opened with the dragon key, in which the player, Dallas Jones, and Bob inadvertently release the dragonkin Zorgoth and his creation, Galvek. Seven old notes are found here, of which four can only be obtained after completion of the quest.

Adamant and rune dragons can also be found roaming the west and east wings of the facility, respectively, behind the red barriers. These barriers can only be entered once Dragon Slayer II has been completed.

The mural between the two metallic dragon chambers can be interacted with to check the player's killcount for those two dragons.