From Old School RuneScape Wiki
Jump to navigation Jump to search
The RuneScape Wiki also has an article on: rsw:Lizard man
For other uses, see Lizardman (disambiguation).

Lizard men were a race previously scheduled to be added to RuneScape, being mentioned briefly in a Behind the Scenes article on 31 March 2004. They are one of several updates on the list of updates that never got released in RuneScape. They are primitive looking versions of Dragonkin. 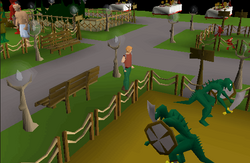 Lizardmen found in an enclosure in Prifddinas during Old School RuneScape's first anniversary.

Although they never made it into RuneScape, they could be found in Prifddinas during Old School RuneScape's first birthday event.

Eventually, an incarnation of these monsters found their way into Old School RuneScape with the release of Great Kourend.

A variant of the Lizard man could be seen in the Eastern Lands during the 2014 April Fools event.