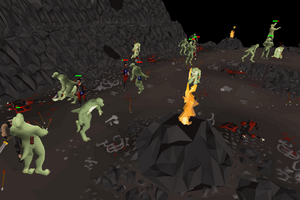 The Lizardman Canyon is a valley in the west portion of Great Kourend, between Lovakengj and Shayzien. The valley is where lizardmen and lizardman brutes reside, and is the responsibility of the Shayzien soldiers to keep them contained.

A wounded soldier overlooking both canyons can inform players of how many people are inside either canyon.

The easiest way to get there is by using the fairy ring with the code DJR.

5.0% Shayzien favour is required to enter the canyon.

The Lizardman canyon contains two valleys; the east and west.

The eastern canyon contains only lizardmen and lizardmen brutes, only requiring 5% Shayzien favour in order to access. In the middle of this canyon there is a single-combat zone, while the rest is multi-combat. Soldiers are always engaging the lizardmen in battle, and it is a popular choice with slayers seeking to complete their task but not tackle the more dangerous lizardman shamans.