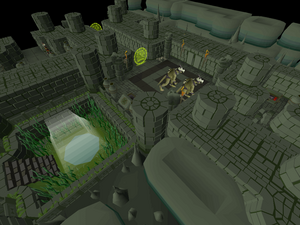 The Lizardman Temple is a temple dedicated to Xeric found beneath Molch. The entrances leading to the temple are a one-way trip, but players can leave via the strange hole in the south-west corner of the temple, where they will end up on the top of the step pyramid in Molch.

A lizardman shaman named Kaht B'alam, the only lizardman players can talk to, can be found at the south-east end of the Temple, giving players insights into their culture. The stone chest near him can be searched to find a stone tablet documenting the origins of the Temple.

The player can find the Shayzien Infiltrator in the north-west corner, who will stop players from attacking the lizardman shamans should they not have 100% Shayzien favour. Six shamans can be found in the area beyond the mystic barrier, with two in each chamber. These shamans share the same combat stats and drop table, and only differ in appearance.

There are stone chests next to the Infiltrator where players can steal from with level 64 Thieving, granting 280 experience.

These chests contain various bolt tips and seeds, and respawn instantly. However, there is a small chance to get teleported out of the Temple if players fail to picklock the chest.