Lizardman shamans are popular monsters hunted by players for their fabled dragon warhammer drop, which fetches a very high price due to its extremely useful special attack for high level PvM encounters. This guide will give a few tips and some setups to help out with your kills.

From Xeric's Inferno, follow the blue arrow to reach the shamans, or use the fairy ring and go north down the ladder to the west.

Lizardman shamans can be found in three locations: 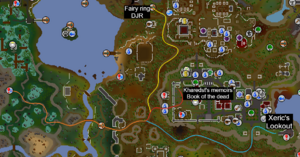 Lizardman shamans use the following attacks: 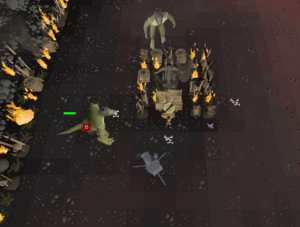 Optimal spot to set-up cannon in north-west corner, a few spaces west of the obstruction.

Using Ranged is recommended as this allows better maneuvering, although Melee is also viable. Lizardman shamans are weak to both combat styles; specifically, they have negative stab defence and no ranged defence bonuses. Slash, crush and magical attacks are not recommended as they have high defensive bonuses against those styles.

If killing lizardman shamans on task, it is strongly recommended to have completed the hard Kourend & Kebos Diary to have the Shayzien armour effect to your Slayer helmet via Captain Cleive. If you do not have the diary completed, you will take some damage from the acid spit attack if wearing the Slayer helmet, and it can deal a lot of damage over time.

If you have not completed the diary, it's best to wear the Shayzien helm (5) regardless of combat class.

Activate Protect from Missiles and your best offensive prayer, and if using, set up your dwarf multicannon in the north-west corner near the obstruction in Lizardman Canyon as indicated in the image above. Focus primarily on killing the north-west and south-west spawns. Always pay attention to all special attacks, namely leaping and summoning minions. Move out of the way as soon as you see them jump, and dodge the minions by manoeuvring around an obstacle or moving a few spaces away. As a ranger, always keep distance, and work the obstacles. Note that hugging the obstacle or wall in the canyon prevents the shamans from jumping. As for the shaman temple, only the western and southern walls will prevent them from jumping.

Activate Protect from Melee, and if using, set up your dwarf multicannon north-west by the obstruction in Lizardman Canyon, or set up your cannon in the open area south-west. Always pay attention to all special attacks, namely leaping and summoning minions regardless. Move out of the way as soon as you see them jump, and dodge the minions by manoeuvring around an obstacle or moving a few spaces away.