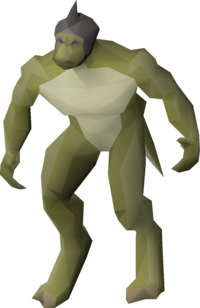 Lizardman shamans are monsters found in the Chambers of Xeric, in the lizardmen shaman room.

Like their surface counterparts, the shamans inside the Chambers of Xeric share the same attack set, although they do not require any Shayzien favour to kill. Regardless of team size, their poison blob attack is ~25% stronger, dealing up to 39 damage to players caught in it without the appropriate Shayzien armour protection.

The amount of players in the team determines the number of lizardmen shamans encountered in the room. A maximum of five shamans can be encountered in large teams, with a minimum of two for solo and very small teams.