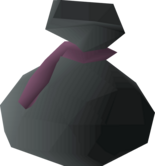 A looting bag is a storage item that can hold up to 28 stacks of any item. Only one looting bag can be in a player's possession at a time.

Tradeable items can only be stored whilst in the Wilderness, including the Ferox Enclave, by using them on the looting bag. Stackable items like runes, arrows or noted items stack in the looting bag as they would in the inventory.

The looting bag may also be used in PvP worlds near some of the common Player Killing hotspots shown below:

It can be obtained as a drop from any monster in the Wilderness, excluding aviansies and abyssal demons, and cannot be picked up with Telekinetic Grab. NPCs that spawn in the Wilderness while doing Treasure Trails, such as double agents, can also drop the looting bag. 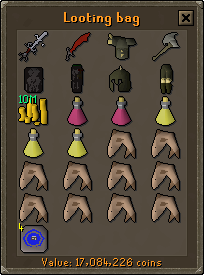 Players can use the Open option, which makes every tradeable item picked up go straight into the looting bag whilst in the Wilderness, including inside the Ferox Enclave. Once players have looted their desired items, they can use the Close option to have items go into the inventory instead.

Players can deposit items in the bank by accessing the bank interface, where they can click on the looting bag to show its contents. Clicking on the items or the "deposit all" function will send the items to the bank. Unbankable items will be moved to the player's inventory instead.[2]

It is extremely popular for both player killers and monster hunters, as player killers can place items in the bag without having to use or drop most of their supplies, which can weaken them greatly. Players killing monsters like green dragons can add an extra 14 kills to the looting bag in addition to what they have in their inventory, boosting profit rates per hour. Stored items in the looting bag do not add extra weight for the player. It is also used by Ultimate Ironman players as extra storage for items they do not currently need but wish to hold onto, although as they cannot use the bank, the only way for them to get the contents inside is to die, or destroy the bag in the Wilderness and pick up the items.

If the player dies with a looting bag, it is always lost upon death, even if the player does not have anything else, that is prioritised over it. When this happens, the player who killed the person holding the looting bag will get everything inside the bag, excluding food and potions.

The bag can be brought onto Entrana, as long as there are no prohibited items in it.