Lord Iorwerth was the leader of the Iorwerth Clan and attempted to summon an entity known as the Dark Lord, believing it to be Seren. He is located inside the Iorwerth Camp in the elven land of Tirannwn. He is involved throughout the entirety of the elf series of quests. Players may also need to see him as part of a Treasure Trail.

Lord Iorwerth is the solution to the hard cryptic clue: There is no 'worthier' lord. Players will need to solve a puzzle box.

Lord Iorwerth was born presumably in the early Fourth Age as son to Lady Iorwerth, the leader of the Iorwerth Clan. Little else is known about his early history.

At some point during the Fourth Age Lord Iorwerth broke one of the nine seals of the Grand Library, which were meant to keep knowledge safe until the right time, discovering that Seren had left a fragment of herself in the Temple of Light, deep within the Galarpos Mountains. Lord Iorwerth became obsessed with finding the fragment, believing it to be the Goddess of the Elves herself, not knowing the true identity and nature of the fragment of Seren. He went to his mother, the current leader of Clan Iorwerth, to inform her of what he had discovered, when she brushed him off, he remorselessly killed her and took her place as leader of Clan Iorwerth and brutally seized control over Prifddinas, sparking the Elven Civil War.

Lord Iorwerth's takeover of Prifddinas meant that the elves in the eastern kingdom suddenly stopped receiving any news from the elven capital. Worried about the city King Baxtorian decided to sent five scouts to check what was going on in Tirannwn. After many months only one of the five, Adwr, survived and returned with the news, that the Iorwerth Clan had taken over the city of Prifddinas and the Tower of Voices. King Baxtorian led a massive campaign trying to liberate Prifddinas, he managed to liberate the clan leaders from the other clans, but ultimately failed in reclaiming the city and had to retreat to his kingdom in the east. Before his retreat, Baxtorian and the six other clan leaders, sang a song that reverted the entire city of Prifddinas into a crystal seed, thus keeping the city and the citizens safe from Lord Iorwerth. With Prifddinas gone Lord Iorwerth suffered a great setback and began devising a plan to restore it without the other clan leaders, which was also centred on freeing the Dark Lord.

Approximately two centuries later in the Fifth Age, Lord Iorweth made an alliance with King Lathas, one of the two kings of Kandarin. In 132 Lathas' father King Ulthas had bestowed King Arthur and his Knights of the Round Table, the castle that became known as Camelot, much to Lathas' dismay. In addition King Ulthas had declared that the throne of Kandarin should be shared between his sons, Lathas and Tyras, angering Lathas even more as he saw it as his birthright, as the King's eldest son, to rule the entire kingdom. King Lathas agreed to help Lord Iorwerth in his plan to summon the Dark Lord, who Lathas believed to be Zamorak, in return for aid in the downfall of Camelot and disposal of his brother. He did not realise, however, that Lord Iorwerth intended to betray Lathas at the first opportunity, not planning to destroy Camelot at all.[1]

An opportunity for the Death Guard arose in 168, when King Tyras and his army left West Ardougne and travelled to Tirannwn through the Underground Pass. Shortly after, Lord Iban, a Kinshra officer, who had been resurrected from the dead by the crone Kardia, and self-proclaimed son of Zamorak, seized control of the Pass, corrupting it. He turned the Well of Voyage into the Well of the Damned and began to build an army of soulless in the depths, thus deterring not only any elves or travellers, but also impeding Tyras from returning, leaving West Ardougne leaderless. The Dark Lord's voice also continued to infest the Pass, a terrifying phenomenon, which was ascribed to Iban. Lord Iorwerth subsequently sent his Prifddinas Death Guard to West Ardougne through Arandar to establish a foothold in the east by convincing Lathas that Iban posed a serious threat.[1] However, they soon found out about the Temple of Light and the Death Altar, which had enough death energy to allow the Dark Lord to return, and began working towards harnessing its power. They discretely took over the city under the pretence of being mourners, come to deal with the fake plague, a hoax set up by Lathas to be able to put the west under quarantine, thus allowing the "mourners" to freely conduct their operations.[2] While keeping the citizens under control by spreading fake symptoms and turning the once great city into a dilapidated ghetto, the Death Guard began tunnelling westwards underneath the city using captured citizens whom they claimed to have been infected by the plague as slaves. However, due to the very dangerous roaming shadows unleashed as a result of the temple's safeguard failing and local dark beasts which could only be killed by elite slayers, the scouting parties were slaughtered, stagnating the operations.[3]

One year later an adventurer on the request of King Lathas managed to clear the Underground Pass and dispose of Iban. With Iban gone, Lathas sent some wizards to restore the Well of the Damned to the Well of Voyage, thus allowing travel to Tirannwn. King Lathas then deceived the adventurer into believing that his brother, King Tyras, had been corrupted by the Dark Lord and therefore had to be stopped. The adventurer travelled back through the Underground Pass to the forest of Isafdar in Tirannwn. They were met by a rebel elf, who was abruptly killed by two of Lord Iorwerth's assassins. The adventurer was then sent to the Iorwerth Camp, where Lord Iorwerth continued the deception and instructed the adventurer in how to construct a bomb to kill King Tyras and gave them a crystal pendant to show allegiance to him. Unbeknownst the adventurer carried out the task and received thanks from Lord Iorwerth and a letter to give to the now sole king of Kandarin. But before the message reached the king, it was intercepted by a rebel leader. The rebel leader Arianwyn revealed himself to the adventurer and explained to them, that they had been deceived by King Lathas and Lord Iorwerth.

From that moment on, the adventurer joined the rebel elves of Lletya and opposed Lord Iorwerth and his plans. They managed to infiltrate the Mourners in West Ardougne and managed to access the fabled Temple of Light and restored its safety mechanism, thus preventing Lord Iorwerth from accessing it for many years to come.

This did however not discourage Lord Iorwerth. Not long after, he received word of the revolution in West Ardougne led by the adventurer and a young biochemist named Elena, where the mourners and their headquarters were stormed and King Lathas was arrested and later executed. Lord Iorwerth sent two agents to kidnap the adventurer and Elena, who had sparked the revolution against the Iorwerth Clan.

Elena and the adventurer were brought to the Iorwerth Camp, but were soon after rescued by Arianwyn and some rebel archers and brought to safety in Lletya. There it was decided to put an end on the Elven Civil War, Lord Iorwerth and the Dark Lord. The adventurer was sent to find the clan leaders of the other Elven Clans, so that they could help restore Prifddinas. They were also sent into a warped version of the Grand Library, where they found the information that Lord Iorwerth had found centuries ago, but also a lot more knowledge that Lord Iorwerth never found. 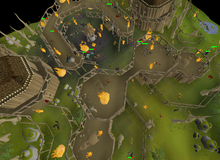 Arianwyn went to Lord Iorwerth and was now convinced that Lord Iorwerth was not the enemy, and that he only wanted to bring back their beloved goddess. Arianwyn then gave away the location of Lletya, which had been hidden from Lord Iorwerth since its founding. Lord Iorwerth launched a vicious attack on the village, setting most of it on fire and killing several people. He marched in and demanded the Orb of light from the Gorlah shrine, and threatened to kill a young elven boy if he was denied. Baxtorian gave in and handed him the orb, which was the last item that Iorwerth needed, but he still needed access to the Temple of Light, and having heard of the dwarves in the Underground Pass, he prepared to launch an attack on their camp in order to gain access to the secret passageway into the temple. 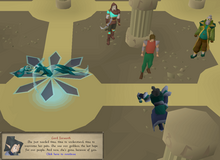 Within the temple, Lord Iorwerth found the Fragment of Seren trapped in a large dark red crystal. He proceeded to release it from its prison, but as he did, Arianwyn, filled with a newfound doubt, skepticism and regret, shot and mortally wounded Lord Iorwerth with an arrow as the Fragment emerged. The adventurer was confronted by the raging Fragment and managed to defeat it, putting an end to Lord Iorwerth's plan. In his dying moments Lord Iorwerth stated that the Fragment was confused and hurt, and that it was angry, but also innocent, before he succumbed to his wound and died.

After his death, the city of Prifddinas was restored, and the leadership of the Iorwerth Clan was passed to Iestin Edern.