Lord Lowerniel Vergidiyad Drakan is the vampyre overlord and tyrant of Morytania. Drakan is a trueborn vampyre hailing from Vampyrium, brought to Gielinor alongside many of his kind by Zaros during the Second Age to contribute to the Zarosian Empire. Drakan later supported Zamorak in his rebellion against Zaros, and later led an army into the kingdom of Hallowvale, which was conquered by Drakan and his forces. Drakan then became the overlord and tyrant of the land he named Morytania, transforming its capital into a blood-farming ghetto and corrupting the entire land. His reign has been marred by violence, including, amongst countless other incidents, the Fall of Hallowvale, the Misthalin - Morytania War, the Morytania Campaign,[1] and the Sanguinesti Liberation War.

Despite his immense importance to both ancient and modern history, Drakan has managed to remain unseen by the public eye during much of his reign until Sins of the Father, apparently having isolated himself in lamentation over the Stone of Jas being beyond his reach, despite, ironically, having once been located directly beneath Hallowvale.

Born to unknown but presumably high-status parents, Lowerniel was raised by his parents alongside his siblings Ranis, Vanescula, and Draynor on the vampyre homeworld of Vampyrium. His father taught him the joy of the hunt, which came to be very important to him and his idea of what defined a vampyre. Eventually, his father also decided to take Vanescula along, and Drakan later remarked that her talent was among the best he had seen. Drakan grew to become one of the most powerful amongst his kind, his numerous victories at the "Night of the Blood Moon" festival displaying his immense power. The burgeoning House Drakan became one of the most prominent Vampyre Houses and ultimately was able to subjugate the other seven Houses under his leadership.

At some point, the vampyres were visited by Zaros, who became known as the Stranger from Afar; he taught the vampyres of higher culture and society, and changed them from hunting animals to more civilized beings, a change which Drakan would later come to resent. Eventually, Zaros returned to the planet and requested the vampyres join him and contribute to his empire. Following the resulting exodus from Vampyrium, Drakan was among Zaros' most powerful and high-ranking followers, but over time, he grew restless in Zarosian society.

Lowerniel eventually decided to support Zamorak, participating in his betrayal against Zaros. He was convinced to support Zamorak after being promised to have the lands of Hallowvale as his for the taking as a reward for his loyalty. Lowerniel amassed an army of vampyres and werewolves following Zaros' defeat, where they fought the Icyene and humans residing there. Despite the immense number of soldiers at his disposal, Lowerniel was unable to obtain total victory, and the armies were locked in siege.

Thanks to the assistance of Verzik Vitur and his brother Ranis, however, he learned of a secret entrance to the castle of Queen Efaritay and sent a few vampyres inside, where they were able to capture Ascertes, Queen Efaritay's husband. Efaritay surrendered in order to convince Drakan to spare her husband. Instead, Lowerniel had Ascertes converted into a vampyre, and Ascertes became Vanstrom Klause. Although Vanescula suspected that Lowerniel was disappointed with this unsporting end to the conflict, he accepted the outcome regardless.

Following the conquest of Hallowvale, Lowerniel had the vampyric city of Darkmeyer created on the site of the Icyene queen's former city and set up the ghettos of Meiyerditch to serve as a pool for human blood tithes to feed the vampyre population. He would later heavily reward Verzik and Ranis for their contribution in ending the war, gifting the former with the Icyene royal castle. Verzik then modified the castle to her own liking and created the Theatre of Blood to entertain herself and the vampyre nobles.

In the aftermath of Efaritay's surrender, a group of holdouts led by the former Saradominist Justiciar known as Phosani decided to defect to Lowerniel's cause, believing that Saradomin had abandoned them. Lowerniel accepted Phosani's offer to convert her troops into blood tithes and thralls in exchange for their offering of Saradominist villagers, whom they led into a trap. He then allowed her and the other turncloaks to create a settlement of their own, which they did in an old hermitage east of Darkmeyer called Slepe, where she founded The Sisterhood.

Under Drakan's rule, all of the local humans and werewolves were forced to pay blood tithes, although the inhabitants of Slepe were the only humans to willingly comply with the law. 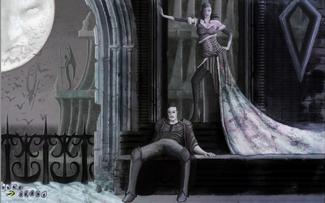 During his rule, two major conflicts with Saradominist humans from the west unfolded. The first was a massive crusade launched by the Barrows brothers during the late Third Age, at the height of the God Wars, with the aim of reconquering Hallowvale from the vampyres. The brothers, empowered by their gifts from a mysterious stranger and leading an army of several thousand Saradominist soldiers and mercenaries, culled a great number of vampyres and gained significant ground into the heart of Morytania, but the crusade was stopped at the walls outside Meiyerditch due to the stranger's intervention, which caused the weakening and eventual death of the brothers.

The second, beginning in the year 1100 of the Fourth Age, happened when Drakan, emboldened by his previous victories, attempted to expand westward into Misthalin across the River Salve through the Silvarea mountain pass, culminating in the Misthalin - Morytania War. During this conflict, the Saradominists discovered previously unknown weaknesses of the vampyres thanks to the efforts of Ivandis Seergaze. Ultimately, the expansion was thwarted after a century of fighting, when Drakan's forces were pushed back across the Salve and the river was blessed by the Seven Priestly Warriors at the conflict's climax in 1200, though Drezel argues that it was Saradomin himself who blessed the river. The temple of Paterdomus was built over the site of the blessing in commemoration. Verzik Vitur, who had played a major role in the invasion, was rewarded once more for her service to Lowerniel with the Sanguinesti Staff, which he had crafted himself.

Some time after the Misthalin - Morytania War, Lowerniel banished his brother Draynor from Morytania for unknown reasons--possibly due to his weakness, which was further exacerbated by crossing the blessed River Salve.

In 1777 of the Fourth Age, humans came to Morytania to settle in the northern lands, building Canifis, Fenkenstrain's Castle, and Port Phasmatys. When Lowerniel heard of this, he immediately ordered them to pay the blood tithes or be destroyed. Though the others capitulated, the inhabitants of one of these settlements, Port Phasmatys, refused. Lowerniel proceeded to besiege the town, but the locals were able to enlist the help of an eastern necromancer called Necrovarus, who used the Ectofuntus to protect the town. Though successful in repelling the vampyres, Necrovarus had his own treacherous motives for doing so, trapping the villagers in a permanent state of undeath to serve as his followers. The locals died and became ghosts, forcing Lowerniel to leave the town as it was, since the ghosts had little use for him.

Lowerniel is responsible for the unknown vile magic that turned the once prosperous landscape of Hallowvale into a harsh land of decay and death, creating gloomy environments such as Mort Myre Swamp and Mort'ton; a strange "mist" was unleashed that turned the people of Mort'ton into Afflicted, and the shades beneath were freed from their catacombs. Although a tithe was attempted, the blood obtained was so foul that Lowerniel had the town left alone, as the inhabitants proved to be no threat.

Lowerniel also created the Haemalchemy Laboratory, which found disturbing results. The lab discovered that the vampyres could survive without blood, and also uncovered the viability of blisterwood weaponry. Vanescula suspected that the former would mean that he would likely not survive, as history had shown that current leaders did not survive fundamental changes to society. The latter proved to be deadly against vampyres, including the trueborn vyre nobility.

A massive mine was excavated to the south-west of Morytania, which provided Lowerniel access to numerous ores. However, when a disturbing secret was found within the mines, Lowerniel had the mine destroyed, with everyone working there killed to keep its secret safe. Lowerniel had one of his followers, Treus Dayth, imprisoned to guard the mine, his tortured soul still remaining even in death to protect its secrets.

Scorning what he viewed as complacent "farming" of blood and recognizing that the vampyres needed to return to their old way of life life, Lowerniel returned to Vampyrium to reflect on his past. He recalled the Yarasa, a cunning, powerful, and agile race that the vampyres had fought against before Zaros had arrived. When the eight tribes were united, they were able to defeat the Yarasa, the remaining survivors being lured out and killed in a graceless "slaughter" which deeply disgusted Drakan, filling him with shame for having taken part in it. However, Xarpus, the king of the Yarasa, had evaded all such attempts. Lowerniel, knowing that he was likely still alive, set out to find and capture Xarpus. He stated he would bear no regrets should he fall, but he was able to overpower the Yarasa king and imprison him in the Theatre of Blood as a gift to Verzik Vitur.

Drakan has also become obsessed with the Stone of Jas during this time, so much so that he has neglected affairs of state almost entirely due to his frustration in having lost it, as Vanescula chidingly remarks. It is unknown at what point the Stone was present in the Daeyalt Essence Mine, only that its former plinth therein now lies empty. Having personally witnessed Zamorak's ascension to godhood, it is possible Drakan desires a similar gain in power for himself, and sees the Stone as a means to this end.

At some point, Lowerniel learned of the existence of the Myreque, and tasked Vanstrom with dismantling the rebel cell. Although they long remained hidden, Vanstrom was eventually able to locate the cell after enlisting the help of an unassuming adventurer, but was able to kill only two of the members before the rest escaped. From this encounter, Drakan also learned that his brother, Draynor, had been slain; although they had not been on good terms, his brother's death angered him. Soon after, Ranis was killed by the same human that had killed Draynor, which made Drakan furious.

Due to the growing vampyre population, shrinking human population, and Drakan's lack of leadership, the vampyre nobles became increasingly desperate. Vanescula, knowing that Lowerniel was no longer fit to rule due to his single-minded obsession with the Stone, sought to dispose of him, but could not do so herself, as the nobles were still loyal to Lowerniel. She recruited the Myreque to assist her in their shared goal of taking out Lowerniel. Vanescula brought the Myreque to Castle Drakan to dispose of her brother, much to Vanstrom's surprise, as he wondered how she had managed to "capture" all of them.

As the two nobles were talking, Lowerniel suddenly emerged from the castle, immediately aware of her intentions. Disappointed with his sister's actions, he demanded the truth. Vanescula admitted to him that she believed he was unfit to rule, as he was doing nothing to address the growing population and faltering supply of blood. Lowerniel stated that he had simply allowed her to do whatever she wanted, as her trifles were insignificant to him, but Ranis' death had prompted him to step out once more to stop the uprising. With little effort, he slew Vanescula's vyres and most of the remaining members of the Myreque, before easily overpowering Vanescula and capturing her. He then charged Vanstrom with dealing with the remaining Myreque as he left with Vanescula.