Lost City is a quest about the fairy land Zanaris. A group of adventurers have set up camp in Lumbridge Swamp, claiming to be searching for the mystical lost city. You must find the truth of this claim, and gain entrance to the moon of Gielinor, Zanaris.

To start this quest, go towards the Lumbridge Swamp- by walking or teleporting to Draynor Village and going south-east. Go to the north-west edge of the swamp to find a Warrior, Archer, Wizard, and Monk standing around a campfire. Talk to the warrior, and ask, "What are you camped out here for?" He will let it slip that he is searching for Zanaris. Ask, "Who's Zanaris?", and then, "If it's hidden, how are you planning to find it?" Lastly, say, "Looks like you don't know either," and in his anger, he will accidentally reveal that there is a leprechaun hiding in a nearby tree who knows how to get to Zanaris. Open up your quests tab and verify that you have started the quest.

Take a few steps north-west, and look for a tree that only has a "Chop" option instead of a "Chop down" option. Click on the tree, and a leprechaun named Shamus will pop out. Ask him "How does it fit in a shed then?", and he will tell you that you need a Dramen staff made from a Dramen tree branch cut from the Dramen tree in Entrana Dungeon beneath Entrana.

The island of Entrana[edit | edit source]

Items required: A knife. Recommended: Runes, a teleport, Food, and a prayer potion if necessary.

Monks of Entrana do not allow armour or weapons on Entrana, but you can take:

Go to Port Sarim, south of the Rusty Anchor Inn on the second jetty, there are Monks of Entrana and a bank deposit box. Store your axe in the bank deposit box and take the boat to Entrana. When you get off the boat, go to the east; then north over the bridge; then west. You will find a Cave monk next to a dungeon entrance. Make sure not to have crafted the Battlestaff or a Bow before climbing down the ladder. You will be kicked off of the island and have to start over. Climb down.

Note: when you enter the dungeon, your prayer will be reduced to nearly 0. If you aren't safespotting, it's suggested that you bring at least one prayer potion to counteract the effect.

Once in the dungeon, you will need to obtain a woodcutting axe. The most straight-forward way to accomplish this is to kill zombies (level 25) until one of them drops a bronze axe. There is a safespot by the mushrooms against the west wall, and another by the little group of mushrooms in southern part of the zombie area. If using the Crumble Undead spell to fight zombies, make sure to save runes for some 20-30 casts for use against the Tree spirit later. Once you have obtained an axe, go south through the cave until you see some greater demons and a small cave off to the south. (Warning: Do not go through the magical door to the east, it takes you to level 32 wilderness.) Run past the demons to the south, and chop the Dramen Tree found inside.

A level 101 tree spirit will appear. An easy way to safespot this fight is to run all the way to the north (with the tree spirit in tow) and then all the way to the south behind the mushrooms. Bring plenty of arrows for Ranged, more than 200 if around 25 Ranged, and the materials to fletch your own bow and craft your own armour. It is possible to melee the tree spirit, but it hits hard (10s). The most efficient strategy is to bring runes, and safespot using Magic behind the fungi to the south of the tree. Crumble Undead is extremely effective even at low levels.

It is possible to have someone else weaken the tree spirit by indirectly damaging the tree spirit with a ring of recoil. The player doing the quest must deal at least 1 damage at any point during the fight for the kill to be counted. 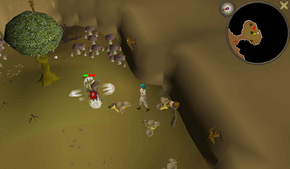 A safespot for ranging or casting magic on the Tree Spirit.

A second possible safe spot is to cut the branch at first from the South-side of the tree, doing this means the tree spirit will spawn on the other side of the tree from you. from there you can just magic it to death as usual. Do not use the mushroom by the greater demons outside of the room as a safespot, as even if you kill the tree spirit, they will respawn again after trying to cut the tree.

Once you've defeated the tree spirit, cut the tree again to get a Dramen branch.

Note: A dramen branch is required for the Freeing Sir Amik Varze subquest of Recipe for Disaster, and another is useful for the smuggling into Thorvald's trial in The Fremennik Trials, but do not make them into staves yet. Cutting at least three branches is recommended.

Use a knife on the Dramen branch to get a Dramen staff.

Warning: If you decide to go through the magical door, you will be teleported into level 32 Wilderness. 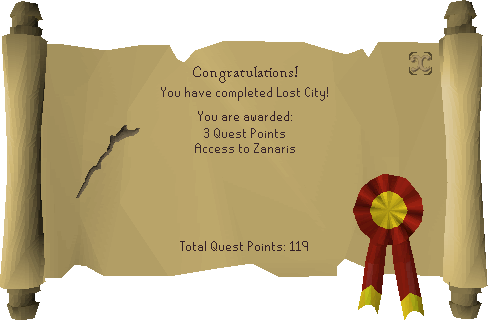 Completion of Lost City is required for the following: