The Lost Tribe is a quest in the Dorgeshuun quest series. Sigmund, the advisor to the Duke of Lumbridge tasks you to investigate sightings of goblins emerging from a newly formed crack in the castle's basement. The goblins turn out to be the pacifist Dorgeshuun tribe which has been lost from history for many years.

{"requirements":"* Completion of the following quests:\n** [[Goblin Diplomacy]]\n** [[Rune Mysteries]]\n* [[File:Agility icon.png|21x21px|link=Agility|alt=Agility]] 13 [[Agility]] <sup title=\"This requirement is boostable\" style=\"cursor:help; text-decoration: underline dotted;\">(boostable)</sup>\n* [[File:Thieving icon.png|21x21px|link=Thieving|alt=Thieving]] 13 [[Thieving]] <sup title=\"This requirement is boostable\" style=\"cursor:help; text-decoration: underline dotted;\">(boostable)</sup>\n* [[File:Mining icon.png|21x21px|link=Mining|alt=Mining]] 17 [[Mining]] <sup title=\"This requirement is boostable\" style=\"cursor:help; text-decoration: underline dotted;\">(boostable)</sup>\n'''Note: '''(Goblin Diplomacy can be completed when speaking with the goblin generals as part of The Lost Tribe quest; it is not required to start The Lost Tribe.)","desc":"Sigmund is the advisor to the Duke of Lumbridge, but the duke does not always take his advice.\n\nWhen part of the cellar wall collapses the duke insists the damage was caused by an earthquake, but Sigmund is worried about a monster attack.\n\nIf you investigate this mystery it will lead you through treacherous caves to uncover something lost by the Gods for thousands of years.","difficulty":"Intermediate","kills":"None","name":"The Lost Tribe","start":"Talk to [[Sigmund]] in [[Lumbridge Castle]].","length":"Medium","items":"* A [[pickaxe]]\n* A [[light source]] (any of the below)\n** [[Bullseye lantern]] (requires [[File:Firemaking icon.png|21x21px|link=Firemaking|alt=Firemaking]] 49 [[Firemaking]]), [[Oil lantern]] (requires [[File:Firemaking icon.png|21x21px|link=Firemaking|alt=Firemaking]] 26 [[Firemaking]]) or a [[Bruma Torch]] are good options.\n** Open light sources (no requirements) such as [[candle]]s or [[torch]]es work but are susceptible to exploding (deals high damage to the player) or being extinguished due to underground gas."}

Crashing in the cellar[edit | edit source]

Start by talking to Sigmund, who is located on the 1st floor[UK]2nd floor[US] of Lumbridge Castle in the same room with Duke Horacio. 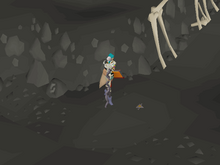 Report this to the duke. Sigmund will join in on the conversation. After the conversation is finished, you'll be able to go down to the basement and use your pickaxe on the rubble.

Go down the trapdoor in the kitchen, and look for a blocked tunnel (rubble) on the east side of the cellar. Use your pickaxe on it. Light your light source, then squeeze through (requires 13 Agility), grab the brooch, and turn back. Otherwise, you'll fall into a pit.

Go back to the duke and show him the brooch. You will be asked to show it to Reldo in the library (located north of the ground floor[UK]1st floor[US]) in Varrock Palace.

Investigating in the library[edit | edit source] 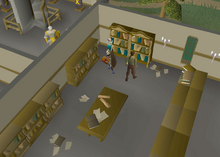 The bookshelf where the book is located

Show the brooch to Reldo, the librarian. He'll tell you to search the bookcases for a book on goblin history, the Goblin symbol book. The book is at the northwestern portion of the room - the furthest up the west wall of the room.

Turn to the last page to see that the symbol on the brooch translates to "Dorgeshuun, goblins of the strong spears". Keep the book for the remainder of the quest since it's very important.

Head to Goblin Village (using a Falador Teleport) and talk to the Generals. Eventually, they will teach you the goblin salute and the goblin bow emotes.

During the dialogue with the Generals, you should choose the following options:

The goblin generals teach the player the goblin greetings.

You will then receive confirmation you've learned both emotes. Double check your emote page to be sure, then move on to the next section.

Go back to Lumbridge, and talk to the duke. He will tell you to investigate the caves further. 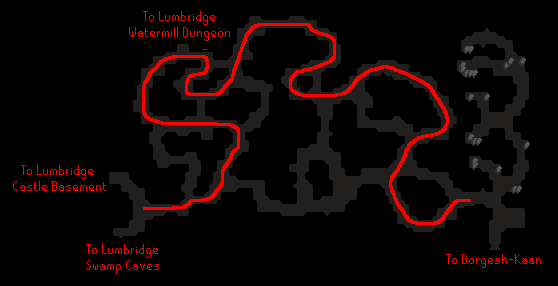 A map of the tunnels.

Go back into the Goblin Maze. See the map for the correct path. If you go the wrong way, one of two things will happen:

One of the symbols on the rock.

The way through the Goblin Maze is the same for all players. See the map.

When you reach the end, you'll find the Dorgeshuun tribe. Talk to Mistag, and do your Goblin Bow in front of him. He will tell you that the Dorgeshuun are actually peaceful, and the Lumbridge kitchen thing was an accident. You'll also learn about the goblins' backstory. Mistag will offer to take you back to Lumbridge if you ask him to show you the way out. Agree.

Speak with the duke and tell him that you've made contact with the goblins. Some silverware was stolen from the castle basement, and the goblins are being blamed for it.

Pickpocket Sigmund (requires 13 Thieving) and unlock his chest (located in the spinning wheel room) to find some H.A.M. robes (keep them as you'll need these for Death to the Dorgeshuun, the sequel quest).

Tell the duke that Sigmund is part of Humans Against Monsters.

You will find the stolen silverware in the crates in the first room.

Give it back to the duke, who will fire Sigmund.

The meeting between Duke Horacio and Ur-tag.

The duke will give you a peace treaty. He will sign it and ask you to set up a meeting with the leader of the Dorgeshuun to sign it as well. Go into the tunnel. This time, you won't have to navigate through yourself because you'll see a new goblin there, Kazgar, whom you will follow to the mines. Talk to Mistag, who will summon the Dorgeshuun leader, Ur-tag to sign the treaty. The signing will commence with a cutscene in the Lumbridge dining room, with you and Mistag as witnesses. During the cutscene you will see Sigmund outside, saying that the goblins will soon be destroyed.

Now, on to the sequel quest, Death to the Dorgeshuun.

Peace summit
The music track that only plays during the cutscene. 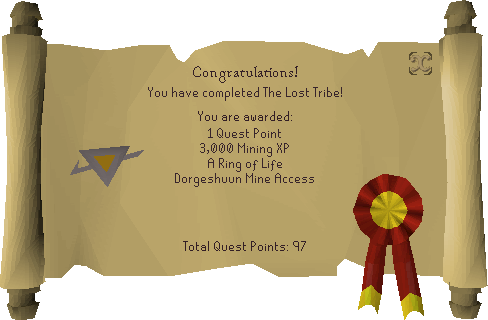