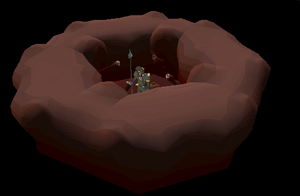 A player in the Lost and Found random event.

Lost and Found was a random event in which players may be sent to a certain small room, called the Abyssal Plane, at any time. The player says "Uh? Help!" and is teleported there, getting a message that says, "You have slipped through to the Abyssal plane!" Four levers are found on the walls; one of which will differ in some way, typically in position, the shape, or colour of the end. The player must pull the different lever to escape and return to where they were.