Lovakengj (pronunciation: /ˌloʊ.və.ˈkeɪn/ "loh-vuh-KAYN") is one of the five cities in the Kingdom of Great Kourend, which resides in a volcanic area exclusively inhabited by dwarves. One of the three cities founded in the history of Great Kourend, Lovakengj was founded by Yonrith Lovakengj,[1] the leader of a dwarven army allied with Saradomin that fought against the Zarosians at Lassar during the God Wars. Today, the city is led by Lady Vulcana Lovakengj of the Lovakengj House.

As one of the five cities of Great Kourend, the city is responsible for providing military equipment for the Shayzien Army; their main export are ores found by blasting rocks with dynamite in the Blast Mine, in addition to Shayzien supply armour, which is made from lovakite, a unique metal found only within Lovakengj.

Since the establishment of trade routes between Great Kourend and the mainland, Lovakengj has established contact with the Mining Consortium of Keldagrim, though they offer nothing notable to Lovakengj.[2] In the past, the city once had maintained contact with the imcando dwarves in the southern kingdom of Varlamore, who reside in an underground city beneath the Avium Savannah. However, they lost contact with them centuries ago,[3] presumably during the War of the Five Houses.

Earning favour with Lovakengj requires you to assist in the collecting of resources for blast mining and the creation of armour. Blast mining will allow players to get ores at an accelerated rate, but only if they choose to invest their time with Lovakengj.

To progress in the Architectural Alliance miniquest, players must gain 100% Lovakengj favour and speak to Lovada, who is found in the building just outside the blast mine. 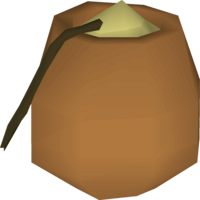 Dynamite is used in the Lovakengj mining operations. It is created from volcanic sulphur, juniper charcoal, saltpetre and a pot, then using the resulting dynamite pot with a ball of wool. Adding the wool to the dynamite gives 0.1% favour.

To acquire the 20% favour required for The Forsaken Tower quest, you will need to make 153 dynamite. Alternatively, for a more simple method, an average of 606 Volcanic sulphur can be mined. Achieving 30% favour will require 226 dynamite, 301 for 40% favour to be able to complete an elite clue scroll step, and 564 for 75% favour. This can then be raised to 100% by delivering all five minecart control scrolls. Additionally, you may complete The Forsaken Tower (requires completion of Client of Kourend and 20% Lovakengj favour) for another 10% favour, lowering the amount of dynamite required to achieve 100% to 498.

Note: All calculations take into account the small amounts of favour gained for mining volcanic sulphur.

Safespot for the sulphur clouds (Must have the spider attacking you otherwise this won't work!) This works similar to Trapping in Thieving. If another player walks under you then you will need to reset the safespot.

Volcanic sulphur (Level 42 Mining required), is found at the sulphur mine in the north-west part of Lovakengj. A gas mask, face mask or slayer helmet/(i) is required when mining here! If the player is not wearing either of the items, then they are told "You'll choke on the fumes if you try to mine without protection". Each volcanic sulphur mined has a 1 in 3 chance of yielding 0.1% favour. Make sure to bring food when mining large amounts of volcanic sulphur, as the sulphur clouds will still deal rapid damage when nearby, even through a gas mask or face mask. Jugs of wine are an especially cheap method of healing from the damage taken. Note: If you choose to only mine volcanic sulphur to get your Lovakengj favour, you will want to use the safespot and shift/drop. Volcanic sulphur is not a notable item, so they are only droppable manually.

Juniper charcoal is created by adding juniper logs gathered by cutting mature juniper tree (located by the saltpetre mines, and requires 42 Woodcutting to chop) to one of the charcoal burners on the beach next to the bank (max 60 per furnace) then light it and pay Smoggy 600 coins (per furnace) to watch over the process for you. This takes about 16–17 hours, and when it is complete the player will receive 50 charcoal per log they put in the furnace, producing 3,000 juniper charcoal per furnace.

Saltpetre can be purchased in the Grand Exchange relatively cheaply. Otherwise, it is found in the area south of the Hosidius bank, and will spawn in one of five possible locations within the area, and moves once the deposit is depleted. A spade is required to gather saltpetre. A helpful tip is that Konoo, a saltpetre digger, will be located wherever the latest saltpetre deposit is located. It is also a possible reward from Wintertodt and Chambers of Xeric.

Once players reach 20% favour, they can start the The Forsaken Tower quest. This quest requires completion of Client of Kourend, and completion of the quest will grant a Lovakengj favour certificate worth 10% favour.

Once players have 30% favour, they will receive permission to mine in the lovakite mine, where lovakite ore can be found. These ores along with 2 coal for each ore, are then smelted in the lovakite furnace, a special furnace south of the Blast Mine (or usage of the Superheat Item spell), making lovakite bars to smith Shayzien supply armour. Players require level 65 (boosts work) in Mining to mine lovakite, and level 45 Smithing to smelt the ore. 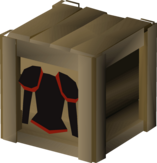 Players can smith various tiers of the supply armour depending on their Smithing level, and turn in the armour pieces to various armourers found throughout Lovakengj. Mining and Smithing experience will also be given as a reward.

However, by smithing a set of supply armour, consisting of a helm, platebody, greaves, gloves, and boots, players will gain larger amounts of favour by packing them into a Shayzien supply crate, found within drawers in the houses of armourers. It takes 11 bars to make one full set of armour.

The tier players are able to smith are dependent on their Smithing level and the amount of favour players have:

Once players reach 65% favour, they may speak to Miriam south of the southern Lovakengj bank to unlock the Lovakengj Minecart Network. Players must deliver five minecart control scrolls to five different locations throughout Great Kourend. Each scroll delivered grants the player 5% favour, with a maximum of 25% available.

The Sulphur mine is located in the north-western section of Lovakengj. Volcanic sulphur deposits are found here. Breathing filters like the gas mask or face mask must be equipped to reduce damage taken from toxic gases in the mine.

The lovakite mine is located south of the sulphur mine and requires at least 30% favour to mine in. It is the only place where lovakite ore can be obtained. A bank can be found within the mine, making it a good place to mine coal.

The Lovakengj mine is a small mine found north-west of the southern bank. Four iron rocks, six coal rocks, and one mithril rock can be found here.

The blast mine is a large mine that can only be used once players have 100% favour. It is run by operators who clean the player's blasted ore, returning ore based on the player's Mining level.