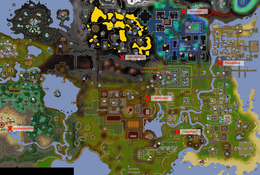 A map of the minecart network.

The Lovakengj Minecart Network, or the Great Kourend Minecart System, is a type of transportation used to travel around the five cities of Great Kourend. Players must have gained at least 65% Lovakengj Favour to use the minecart system.

The quickest and most convenient way of accessing the network is by using a Skills Necklace to the Woodcutting Guild and running north.

All of the travel services offered by the minecarts cost 50 coins per ride. Players can ride the carts for free after paying a one-off fee of 100,000 coins to Miriam at the Lovakengj station (other conductors do not offer the ability to pay the one-off fee).

Before being able to use the minecart system, players must speak to Miriam south of the Lovakengj bank, marked with a

icon. The player must take five minecart control scrolls to the other four cities and the Mount Quidamortem station added with the addition of raids, to fully access the minecart system. Delivering the scrolls will grant players 5% Lovakengj favour for each scroll delivered.

The minecart system offers five routes across Great Kourend, and one to Mount Quidamortem in the Kebos Lowlands.