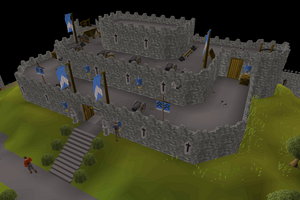 Lumbridge Castle is a large castle located in Lumbridge and home of Duke Horacio. The courtyard enclosed by the outer walls features two decorative fountains and two statues, one of an ancient king and one of an ancient hero. A short flight of three steps joins this to the castle's front entrance. Another entrance is behind the castle.

All Lumbridge Home Teleport and Lumbridge Teleport spells take players to the courtyard of the castle.

The ground floor is home to various water sources, a Cooking range, various decorations such as a long table and many portraits, and two quests: Cook's Assistant and Recipe for Disaster. In order to use the range, players must finish Cook's Assistant.

The Cook's Assistant and Recipe for Disaster quests can be started here by talking to the Cook in the kitchen on the main floor. A trapdoor in the kitchen leads down to a cellar containing bucket and knife spawns, and an entrance to the Dorgeshuun Mines.

The First floor is where Duke Horacio's bedroom is and where he spends much of his time. Players can start the Rune Mysteries quest by speaking with him. He also provides a free Anti-dragon shield to any player who has started the Dragon Slayer quest. Sigmund, his advisor, is the starting point of The Lost Tribe. There is a Spinning wheel in the room next to Duke Horacio and the Crafting tutor. The spinning wheel is one of the most popular (most used) spinning wheels in RuneScape due to its proximity to the second floor bank.

The only notable thing on this floor is a bank, which houses the only Bank tutor. There is also a place where 4 logs respawn, great for beginner's training Firemaking and Fletching.

Before either the Recipe for Disaster or The Lost Tribe quests, this floor had no use except a respawn for a cabbage, some boots and other practically useless items. After the Recipe for Disaster quest, players will have access to a bank and 2 stores down here. Additionally, after the Lost Tribe quest, players get direct access to the Lumbridge Swamp Caves. The cellar can be accessed by climbing down a ladder located in Lumbridge Castle's kitchen.