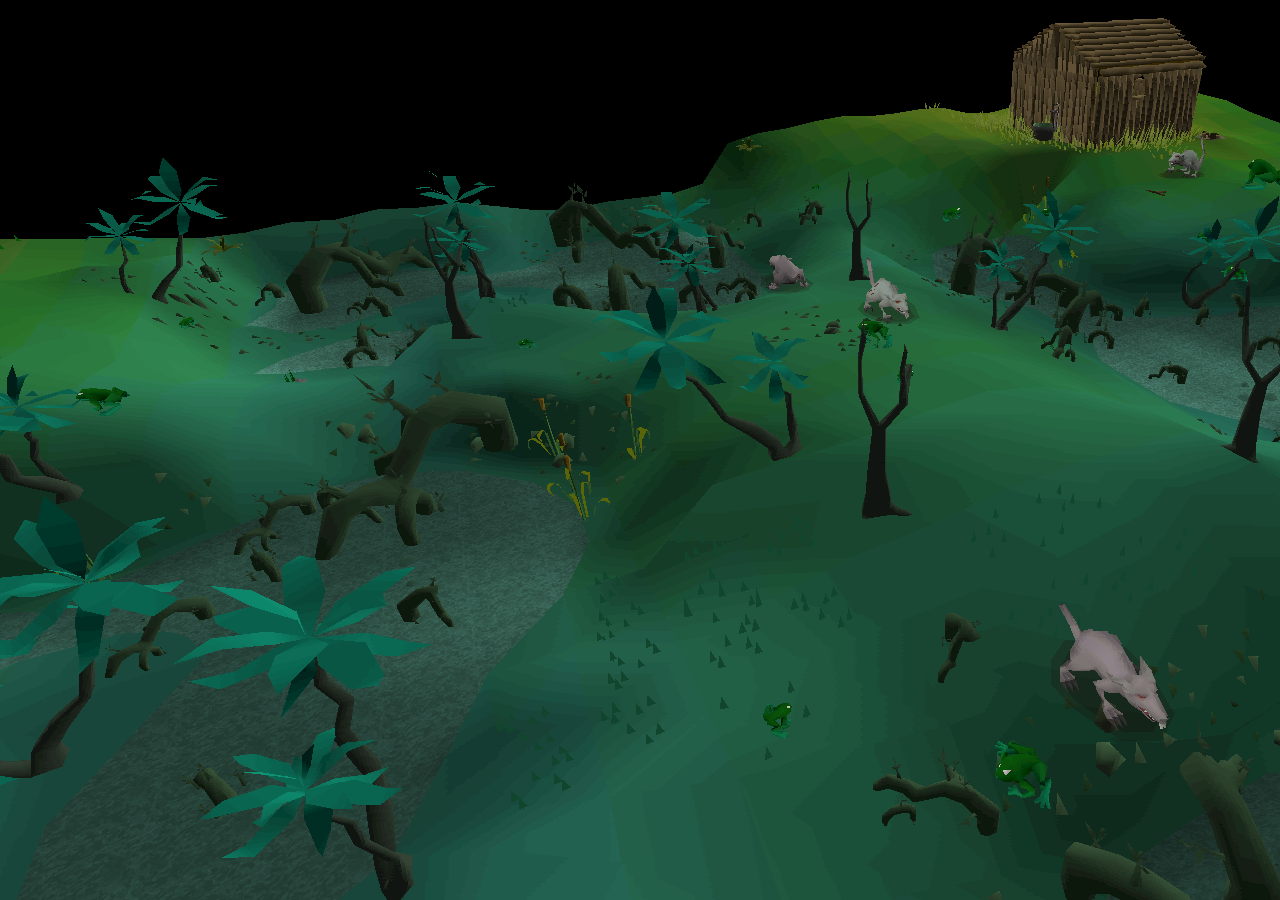 There are several fishing spots on the east end of the swamps that are ideal for novice anglers. There are two mining sites in the swamps.

Hermit Father Urhney (from The Restless Ghost quest) can be found in the swamps as well as the entrance to the Lumbridge Swamp Caves.

The starting point to the Lost City quest is in the swamp as well as the entrance to the lost city itself, Zanaris. You can also craft water runes at the Water Runecrafting altar which is in the swamp. Finally, there are about a dozen Swamp tar spawns around and to the north and west the Water altar.

Recently, the Misthalin Mystery quest was added and this quest can be started by speaking to Abigale (or Hewey, who sits next to her) in the south-east corner.

A mine can be found south of the Fishing tutor along the south-eastern shores of the swamp. This mine is ideal for new players as it contains five copper rocks and five tin rocks. The Mining tutor can also be found here. He will give you information on the basics of Mining, and he will also give you a bronze pickaxe if you so happen to require one.

The water altar can be found in the centre of the swamps. You need to be level 5 Runecraft and have a water talisman or water tiara to enter.

A small shed can be found in the centre of the swamps. Inside, you will find several crates and some farming tools. If you have completed the Lost City quest and you are wielding a Dramen staff, then you will be teleported to the city of Zanaris upon entering this shed.

A little north-west of the water altar is the entrance to the Lumbridge Swamp Caves. There is a candle seller near the entrance who will sell you a candle for 1,000 coins. You will need a light source, a rope and a tinderbox to enter the caves safely. Taking a lit candle into the caves is dangerous as there is gas fumes in some areas.

West of the Lumbridge Swamp Caves is Father Urhney's house. He plays a key role in The Restless Ghost quest as he gives you an Amulet of ghostspeak. There is a leather gloves respawn in his house too.

South of Father Urhney's house is another mine useful for more advanced players. There are seven coal rocks, five mithril rocks and two adamantite rocks.

North of Father Urhney's house is a small camp. It has a monk, wizard, archer, and warrior. The monk, wizard, and archer will not talk to the player much, but talking to the warrior will start the Lost City quest. There is a pot item spawn north-east of their camp.