Lunar Diplomacy is a quest focusing on the feud between the mainland Fremennik and the Moon Clan. Completion grants access to Lunar Isle, and a new spellbook.

Note: You must keep your Seal of passage, once obtained, on you at all times while on the Lunar Isle. If you do not, you will be teleported off of the isle if you try to talk to any NPC. The lantern given during the quest does not come with oil in it, so bring a lightable regular bullseye lantern. If you put the emerald lens in the given lantern, drop it and ask for a new lens, which you then use on your working brought bullseye lantern.

Items needed for this part of the quest: Tinderbox and bullseye lantern (or swamp tar and means to get to Rimmington).

Note: If you already have a bullseye lantern (unf) in your bank, you will have to bring it with you, or else Cabin Boy will not give you one.

A player finds a jinx.

When all the seals are wiped, talk to the captain again, and sail to Moonclan Island! 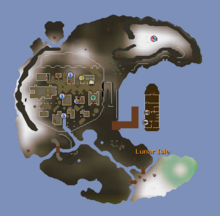 Make sure to keep your seal of passage in your inventory at all times!

There is a bank and a general store on Moonclan Island, so you can get items here. Find Meteora in the village; she is on the south-western side of the village by the wall. She will tell you that although they don't have a leader, the Oneiromancer will be able to help you more than anyone. Walk to the south-eastern part of the island, and find the Oneiromancer (near the Astral Altar), who tells you that you will need three things (which must be done in the following sequence).

Items needed for this part of the quest: Combat equipment, guam leaf, marrentill, pestle and mortar, and a suqah tooth.

Talk to Baba Yaga in the chicken house in the village (north of the bank in the fenced area — it walks like a chicken). She will give you a special potion bottle, and tell you that you need a guam leaf, marrentill and a crushed Suqah tooth.

First, fill the empty vial with water; then travel to the south-east again, and kill a Suqah (level 111). Suqah can be safespotted using the tree on the path to the Oneiromancer. The tooth does not drop every time, but it's fairly common. Make sure to also pick up their hides, as you will need four (4) of them later on. (Note that you do not need to get all four hides now, as you will be killing more Suqah to obtain the amulet later, so wait until you speak to Meteora to start collecting them as they are heavy.) They also drop guam and marrentill herbs. Once you have a tooth, add the guam leaf and marrentill to the vial, and then crush the Suqah tooth with the pestle and mortar to get a ground tooth. Add the ground tooth to the vial and then talk to the Oneiromancer again to give her the potion.

A player enchanting the Dramen staff.

Items needed for this part of the quest: Dramen staff (that you are willing to lose - bring several if you want multiple free lunar staves), necessary items to access all four (air, fire, water, and earth) elemental rune altars (requires either the corresponding talismans or tiaras, an elemental talisman, access to the Abyss, or Guardians of the Rift minigame).

Talk to the Oneiromancer to give her the potion before starting the staff. You won't be able to make lunar staves after this next part (and must pay 30,000 coins for more), so it is advisable to make more than one. Take your dramen staff (or staves) to all four elemental altars in this order: Air, Fire, Water and Earth. Once there, 'use' the staff on each of the four altars.

The lunar staff or staves you create will change names depending on which step you are currently on in enchanting it. Only enchanting it with the air element labels the staff 'Lunar staff pt 1', with air and fire 'Lunar staff pt 2' and so on and so forth. After the fourth enchantment of earth, it becomes a lunar staff that you are unable to equip until you are able to wear clothes of the Moon Clan.

Items needed for this part of the quest: 400 coins, a pickaxe, hammer, a needle, 2 pieces of thread, 4 Suqah hide, Seal of passage, tinderbox, and a spade. Combat gear to kill several Suqah. 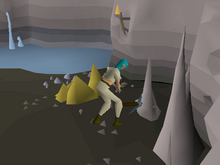 Mining the stalagmite for the helm.

These consist of eight different items: 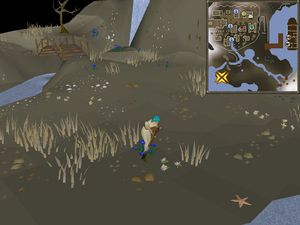 Take all items back to the Oneiromancer, and she will give you all your obtained items back (make sure you have 11 free inventory spots) plus some kindling that was obtained from the first ever magic tree and a waking sleep vial.

Note: You can use the kindling on the vial, drop the soaked kindling, and talk to the Oneiromancer again to obtain a second vial and kindling in case you need to return to the Dream World.

Return to the village and from the bank grab runes to cast Combat spells on the boss, some food and possibly Agility boosts (e.g. agility potion), tinderbox, an agility boost (highly recommended, as failing the agility challenge deals 8 damage), and if you wish, an axe of any type (but not necessary because one is obtainable later). Make sure you don't bank the seal of passage or you will have to go get it from another bank before you can continue the quest. Equip all of the lunar items that you acquired, including the lunar staff; if not, when you use the kindling on the brazier, it will not work and you have to get another kindling and take another waking sleep vial from the Oneiromancer.

Important notes about the Dream World:

Enter a long building on the western side of the village that has a ceremonial brazier and a staircase inside. Use your waking sleep vial on your kindling, light the brazier with your tinderbox, and use the kindling on the brazier.

A player entering the Dream World.

You are now in the Dream World. Talk to the Ethereal Man or Ethereal Lady at the centre of the Dreamworld, where they will tell you that you need to face six puzzles. At the edges of Dream World are stone portal-like things; step into them to attempt each puzzle. After completing each puzzle, talk to the man or lady in the centre again to discuss what the challenge has taught you.

The Ethereal Fluke's challenge involves dice. You need to get the dice to add up to the numbers that the Ethereal Fluke calls out, but it's not as random as it seems; the dice only have two possible combinations when you roll them, corresponding to the number opposite them on a die. Opposite sides of a die always add up to 7, meaning the following:

When the puzzle resets, the initial value will always come out to 21. Based on this, one can easily solve this puzzle with a little addition or subtraction. 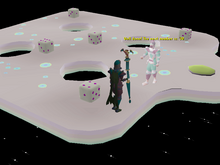 Example solve: the Ethereal Fluke asks for 20, so flip a 4 over to reach the goal.

Once finished, you'll be taken back to the centre. Tell the Ethereal Man/Lady what you've learned and enter the next puzzle.

It is possible to get the same sequence more than once. A list of possible sequences follows: 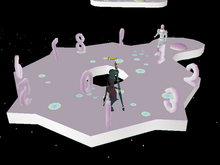 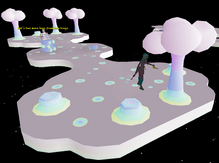 This is a simple Woodcutting game, wherein all you must do is chop more logs than the Ethereal Perceptive. The goal is to be the first one to stack 20 logs in the centre on the "Deposit Log pile". If you're limited on inventory spaces, simply chop a few at a time and then stack them and continue cutting, but note that once you have deposited 20 logs, you'll be unable to pick up your items. The Ethereal Perceptive supplies a bronze axe if you don't have an axe of your own. This is one of the easier challenges.

4. Where am I? (white north-western platform - pink on iOS)[edit | edit source]

This challenge tests your memory. Speak to the Ethereal Guide, you have to jump between platforms hoping not to find the false platforms that will collapse and return you to the start. 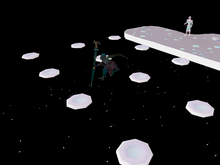 Hopping around the dreamy puffs.

5. The race is on! (yellow-green eastern platform)[edit | edit source] 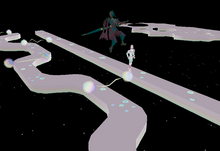 A simple Agility test. Beat the Ethereal Expert to the end of the passage by jumping four hurdles whilst he walks a straight path. This is fairly easy though an Agility potion and a small amount of food might help because failing a hurdle will cost you 8 Hitpoints. Upon reaching the end of the path, be careful not to click out of the dialogue with the Ethereal Expert, or you will have to race again.

6. Anything you can do... (teal south-eastern platform)[edit | edit source] 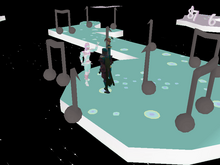 A mime-copying game, very similar to the mime random event. Simply copy the emotes the Ethereal Mimic uses. After each emote, the mime will nod if you are correct or shake no — don't copy this yes or no emote! 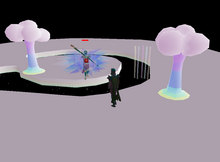 Once you've completed all the challenges, talk to the guide in the centre, and he will ask if you are ready to face the ultimate challenge. Say that you are, and you get to face "Me", a level 79 opponent who's pretty easy and is geared to your stats. You will occasionally be teleported around this arena, but this is more annoying than dangerous. The chats are quite amusing from "Me", so listen out!

Once you have defeated "Me", talk to the guide at the centre of the Dream World, then exit via the lectern, and go and talk to the Oneiromancer again.

Tip: Speak to Baba Yaga before leaving Lunar Isle to unlock the Ourania Teleport spell. If you intend on doing this, switch spellbooks to the Lunar spellbook at the altar next to the Oneiromancer before going to Baba Yaga. 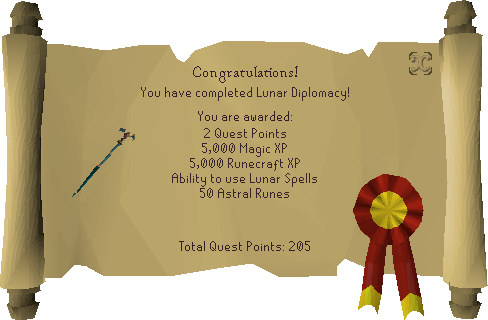 Completion of Lunar Diplomacy is required for the following: