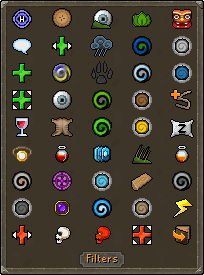 The Lunar spellbook is a spellbook that players can access upon completion of the quest Lunar Diplomacy. Making extensive use of astral runes, the spellbook is primarily oriented towards utility spells and combat-support spells, reducing or eliminating the need for certain items and equipment to carry out certain tasks. A larger set of spells are accessible to players who have completed the quest Dream Mentor.

Players must pray at the astral altar in the south-east end of Lunar Isle to switch to the Lunar spellbook. Astral runes can also be crafted at this altar using the Runecraft skill; players cannot craft astral runes through The Abyss.

Players who have level 80 in Construction (or 75 with a +5 spicy stew boost) can build a lunar altar within their Achievement Gallery, allowing them to freely switch between the standard and lunar spellbooks without having to travel to the astral altar.

The combat spells of the Lunar spellbook are primarily used for player support, such as curing and healing, rather than spells that directly damage opponents.

A player transfers their Hitpoints to two players through the Heal Group spell.

A player treats a farming patch with supercompost through the Fertile Soil spell.