Lutwidge and the moonfly 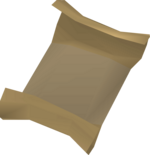 Lutwidge and the Moonfly is a poem written by a bard named Shudersque that can be found in the library of the Myths' Guild after completing Dragon Slayer II.

The poem describes the encounter between Lutwidge and the Moonfly. If players speak to Lutwidge about his grand feats, he will tell players that the poem's telling of the battle is a little embellished and rife with errors. If players have the poem in their inventory, he will also tell them that the sword used to was actually bathed in the sap of a yew tree, rather than sheep's blood.

The following text is transcluded from Transcript:Lutwidge and the moonfly.

'Twas drusky, and the inky Lum,
Did gurgle and gangle by the bridge,
The pulvonic horror at last had come,
To face young Arls Lutwidge.

To draw the creature toward you,
Drag out your blade, so sharp and bright,
Smeared with the sweet thick blood of ewe,
While you kneel, bathed in moonlight.

Donned in armour, of spike and barb,
He pondered the beast while he wait,
Was it he that caused such stupor,
A bloodlust it could not sate.

Swiftly broken from reverie,
By a distant, disgusting cry,
Above a shadow loomed eerily,
Eyes of a deep red dye.

The beast of moon and wing did swoop,
Brave Lutwidge stood his ground,
He swung with both his arms in loop,
Its head came tumbling down.

So now you know why all the folk,
On both sides of the River Lum,
Lost lots of sheep and lots of sleep,
And lived in fierce feardom.

'Twas drusky, and the inky Lum,
Did gurgle and gangle by the bridge,
The pulvonic horror undone,
By bold, brave Arls Lutwidge.