The Macaroni Penguin is a penguin with yellow crests in the Here be penguins region. Specifically, it is found alone on one of the two islands found north-west of Miscellania, alongside a bigger island full of regular penguins, not to be confused with the island with the fairy ring, which is further west.

It can only be seen from the small peninsula with a bench found north-west of Miscellania. It periodically does one of a number of unique animations, either clapping its hands or moving its head from side to side while tapping its foot. 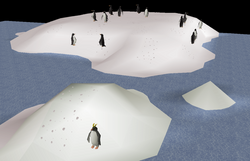 The macaroni penguin on an island of its own on Here be penguins. 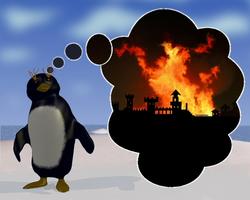 The macaroni penguin in Postbag from the Hedge
Retrieved from ‘https://oldschool.runescape.wiki/w/Macaroni_Penguin?oldid=14262213’
Categories:
Hidden category: