The Mage Arena is a members-only area located deep in the Wilderness. It is a large arena where multiple battle mages affiliated with the three gods are gathered, and the starting point for the miniquests Mage Arena I and Mage Arena II.

After completion of these miniquests, players will receive the three god spells, staffs and capes. 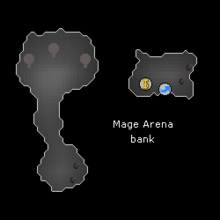 A map of the bank and the connected area.

In addition, the player will receive one free god staff from the staff merchant depending on the god they chose during the miniquest, whilst the other two must be bought for 80,000 coins each.

Players who wish to use the three god spells outside of the Mage Arena must charge them first by casting them 100 times inside the arena on the battle mages walking around the arena. The spell does not have to deal damage to count toward the 100 required casts. This only has to be done once.

Once you have charged a spell, you will receive a message saying you are now able to cast the spell outside the arena.

The aggressiveness of the battle mages depends on the god cape worn by the player; mages are not aggressive to players wearing their God's cape.

Protect from Magic is recommended for fighting battle mages. As the spells they attack with can hit up to 20, it is recommended to bring prayer potions and food. However, players possessing high Magic and Defence levels may find it more economical to use food instead.

The Mage Arena bank is often called 'Mage Bank'. It is one of only two banks in the entire Wilderness (the other being in the Ferox Enclave), and one of the few areas in the Wilderness where players cannot attack other players.

This makes the Mage Arena a player killing hotspot as people training the god spells will almost always have a valuable drop in blood runes as well as a bank area for those farming items or needing to restock after a fight with a Wilderness boss.

Player killers often use the Tele Block spell here to prevent players from pulling the lever and escaping to the Mage Bank.

Inside the arena, player killers cannot attack players who are fighting Kolodion during the events of Mage Arena I miniquest, but are able to after the quest's completion. In addition, some player killers may even dress themselves as the Saradomin battle mage in the arena, usually in the attempt to ambush players. However, this is not common. Be careful not to attack the disguised player, as you will become skulled.

As the inside of the Mage Arena is still considered part of the Wilderness, and located at Level 52 Wilderness, teleports will not work inside the arena.