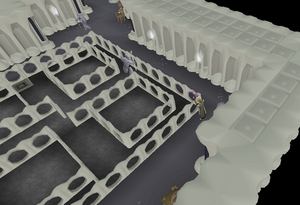 A player in the Telekinetic Theatre.

The Telekinetic Theatre is one of the four minigames in the Mage Training Arena. It involves casting Telekinetic Grab to move the stone Maze Guardian statue to the exit square in a maze to restore the guardian back to life. The entrance to this minigame can be found at the southern portal, in front of the blue floor mat, of the Mage Training Arena. Entering the room requires level 33 Magic.

There are 10 possible mazes. A maze can take anywhere from seven to ten spell casts to complete. Players will receive 2 Telekinetic Pizzaz points for each maze they complete. After solving five mazes in a row, players will get a bonus of 8 Pizazz points, 10 law runes, and 1,000 Magic experience. This streak is kept, even after leaving the area.

In this room, players can speak with the Telekinetic Guardian, who can explain how the Telekinetic Theatre works. Players must cast the Telekinetic Grab spell on the Maze Guardian statue to move it north, south, east, or west through a maze. As with all Mage Training Arena minigames, players must have the progress hat equipped or within the inventory to play.

Players can attract the Maze Guardian statue from any position on the sides around the maze, except for the corners. For example, if the player is standing on any tile of the northern side of the maze, and casts Telekinetic Grab on the statue, it will move north. Casting the spell from a corner of the maze wastes a law rune without moving the statue. Experience will still be rewarded for the spell. Once the player casts the spell, the player will be unable to move while the spell effect is in the air. After the spell activates and the statue starts sliding, the player will be able to move again.

For players who have difficulty seeing the maze, use the Observe option by right-clicking the Maze Guardian statue, which will switch to an overhead view. If players make a wrong move or have difficulties, they can choose the Reset option to return the statue to its starting position. Leaving an incomplete maze will result in the player starting over from a new randomly selected maze. Resetting a maze or leaving the maze early will not reset the streak counter.

When you've completed a maze and wish to do another, speak to the Maze Guardian statue and select (

It is highly recommended players wear the graceful outfit. The graceful outfit's 30% increase to recovering run energy is invaluable while waiting for the statue to finish moving. If the player does not have full graceful, they should ensure that they are not carrying unnecessary weight, as this will make run energy drain faster. It is suggested, but not necessary, that players equip an air elemental staff to lower the costs of Telekinetic Grab to just the cost of law runes.

Assuming each maze has the same probability to be assigned, an average 8.3 spell casts is required for every maze. This means, on average, 2784.5 Magic experience is gained for solving 5 mazes. Factoring in the bonus 10 law runes received, players will spend 31.5 law runes to gain 18 Telekinetic Pizazz points. You would need around 350 law runes to unlock Bones to Peaches.

Based on these conditions, each law rune is worth 0.57 Telekinetic Pizazz points and grants 88.40 Magic experience. Ignoring the potential profit from Mage Training Arena rewards, this amounts to a cost efficiency of −1.61 coins/xp for each cast of Telekinetic Grab. For comparison, casting Camelot Teleport will grant only 55.5 Magic experience at a cost of −2.56 coins/xp.

On average, players can complete each maze in around 1 minute. Adjusting for loading time and minimal mistakes, players can expect to complete around 50 mazes per hour. This equates to approximately 180 points per hour. As such, players can easily collect 200 points, one of the requirement to unlock Bones to Peaches, in a little over an hour.

Note: The minimap and solutions are not facing north. The images are rotated and taken from the Observe viewpoint which can be triggered by talking to the Maze Guardian.