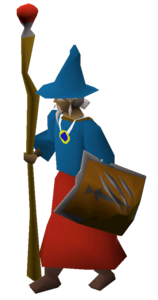 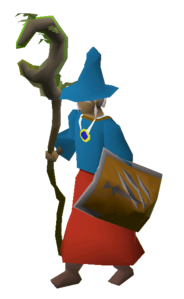 A magic pure or mage pure is a type of low level free-to-play combat pure account that focuses on training magic. This build is one of the most common ones in the low level combat brackets for both 1-vs-1 fights and multicombat clan wars, as early on combat spells allow to outdamage most other combat styles.

While other free-to-play combat pures that rely on melee or ranged attacks gain hitpoints experience while training their combat skills with standard methods, magic can be reliably trained without gaining any hitpoints experience in the free-to-play worlds. Because of that, magic pures tend to have low hitpoints levels and a considerably high damage output in the lower combat level brackets. However, due to the low attack speed of combat spells and the lack of magic max hits progression past 59 magic level, these pures are rarely used on higher combat levels for typical 1-vs-1 combat.

Beginner level magic pures can be be trained within minutes. With as low as level 13 magic, they already have access to Fire Strike with a max hit of 8, which is more than half of the hitpoints of the majority of players within the very first combat level brackets. This makes it an excellent build for the beginners that want to try out free-to-play PvP combat.

magic without restriction. These pures rarely train other combat skills, although there are similar hybrid builds that utilise other combat styles such as ranged. Additionally, higher level magic pures might consider training

attack to 30 in order to wield the Bryophyta's staff.

Since most of the free-to-play magic items do not have any requirements, pures have almost immediate access to gear with the highest magic accuracy bonuses except for the weapon. With 30 attack and magic, the Bryophyta's staff can be used over elemental staves to maximise the magic accuracy bonus. However, it is rather expensive and should be used in caution within dangerous PvP activities, especially without the Protect Item prayer.

The wooden shield is easily available for all accounts, which makes it more common among low combat level pures. It is also lighter than the anti-dragon shield, but it provides lower defensive bonuses. On the other hand, anti-dragon shield requires one to start the Dragon Slayer I quest which by itself requires 32 quest points. While this shield is heavier, it provides about double the defensive bonuses of a wooden shield.

Leather gloves can be used instead of the leather vambraces for their higher crush defence bonus lowering the accuracy of the strength pures.

Instead of wearing a shield, some pures tend to use a chronicle instead. It allows the owner to teleport to a spot nearby the Champions' Guild, but keep in mind that it does not work within the wilderness. It offers no combat bonuses.

Wizard's mind bombs can temporarily boost the magic level by +2 when under 50 level or +3 otherwise. Since the boost is rather insignificant, they are rarely used in practice, but they do allow the user to access spells above their base magic level.

Magic can be trained without gaining hitpoints experience with splashing, curses, teleporting, enchanting jewellery and alchemy. As a rule of thumb, hitpoints level should be kept just high enough not to get killed too easily within the combat level bracket.

Magic pures typically use a combat spell of the highest available tier autocasted with an elemental staff of the corresponding element. For example, a magic pure with 13 magic level can autocast the Fire Strike combat spell with a staff of fire to save fire runes.

In no-honour fights, using Bind or Snare and farcasting the opponent is a very effective technique against opponents that do not use magic attacks. In multi-combat areas, a successful Bind or Snare alone might allow the team to focus on the opponent and perform a KO.

Manual spell casting allows to cast the first spell 1 tick sooner as opposed to autocasting. This is especially important when chasing opponents in the deep wilderness.

In 1-vs-1 combat, players might consider downgrading the autocasted spell and manually casting the best available spell as a form of knockout attack. Combat spells are pretty slow and relatively easy to heal against with decent food, so even with their high damage output, they are difficult to perform combos with. On top of that, free-to-play magic lacks typical knockout attacks. By autocasting a combat spell of a lower tier, the opponent might not expect a high tier spell or might not heal enough to protect against it. While it does lower the overall damage-per-second rate, it might make the opponent more eager to risk, which in turn increases the chances of a successful KO.

The curse spells are rarely used in practice, although the Curse spell that lowers the opponent's defence level by 5% can be somewhat useful against opponents with a high defence level. Players rarely carry items that could remove that effect in the free-to-play worlds.

A Teleblocker is a niche variant of the magic pure that aims to gain access to the Tele Block on a very low combat level starting from 44, or 42 when using wizard's mind bombs. Their hitpoints are typically trained only high enough to match the combat level bracket of the rest of the clan. These accounts are leveraged to use the Tele Block spell in low level clan wars. While Snare can grant some hitpoints experience for non-ironman accounts and might be avoided for that reason, these accounts can safely use Bind and curses to support their team.

Similarly, a Snarer is an account with at least 50 magic level and low hitpoints that allows ultra low level clans to use Snares against their opponents when typical accounts with the same combat level rely on Binds. Snare can be used by players with as low as 27 combat level, or 26 level with boosts.

Some magic pures choose to train prayer, mostly to unlock the protection prayers at level 43. While magic boosting prayers such as Mystic Might do affect the magic accuracy and defence, they do not increase the maximum damage of the combat spells, so the effect on the overall damage output is not significant. This makes the magic-boosting prayers much less important than comparable ranged or strength boosts for other builds.

Magic pures often have a relatively low hitpoints level and no combat skills other than magic, which makes them very easy to convert into other 1 defence builds that are more successful in typical 1-vs-1 combat. They can also train defence to support higher level teams as magic tanks.