The Mahjarrat (pronounced MAH-jer-att) are a very powerful, warlike and long-lived race from the realm of Freneskae. The Mahjarrat have powerful innate magical powers, some of them delving into necromancy or manipulating the Shadow Realm, and all of them capable of shapeshifting and sensing the presence of another member of their race.

Although not immortal, Mahjarrat age slowly and take the appearance of skeletal humanoids. They are primarily followers of the gods Zamorak or Zaros and often reference "going North". Additionally, General Khazard and his men make reference to a 'ritual' amongst the Mahjarrat performed 'in the place of half light and ice' when the planets are aligned, which may be related.

The Mahjarrat were created by the Elder God Mah, after whom their race is named. When Zaros, one of Mah's original two creations, left her, Mah began unintentionally to dream the Mahjarrat into existence. They were pale imitations of Zaros and his counterpart Seren.[1] Seren was concerned, as the creation of the Mahjarrat made Mah grow weaker. Seren appeared before the Mahjarrat and instructed them to regularly sacrifice one of their members to restore Mah. Despite the sacrificing rituals, Mah grew weaker and began to dream more monstrous and instinctual beings into existence.[2]

The Mahjarrat came to Gielinor during the Second Age, they were brought by Icthlarin and Amascut who had ventured out into the universe looking for allies to help them in the Kharidian–Zarosian War. Under Icthlarin's leadership the Mahjarrat became known as the Stern Judges of Icthlarin and were able to overwhelm the Zarosian invaders. However after fighting them back and securing peace, it was not long before unrest began to grow. The Mahjarrat Sliske switched allegiance to Zaros and the Zarosian Empire and convinced many Mahjarrat to do the same. The Mahjarrat felt that Zaros truly understood their nature and his greater power would bring them more glory, according to Azzanadra.[3] The Mahjarrat's betrayal caused the war to break out again. With the Mahjarrat on Zaros' side, the Zarosians' victory was inevitable, until Tumeken ventured out on the battlefield sacrificing himself to fend off the invaders. The surviving Zarosians were then forced to retreat. 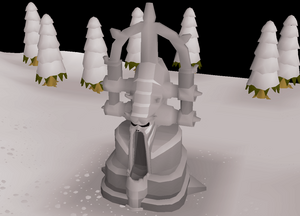 An old shrine found in the North, which is of importance to the Mahjarrat.

After centuries in the service of Zaros, unrest and dissatisfaction began to grow among some of Mahjarrat, particularly the general Zamorak, who began to plan a rebellion with some of his fellow Mahjarrat. When Zamorak got his hands on the Staff of Armadyl, he and his allies (including Hazeel and Zemouregal) began the rebellion, which resulted in Zamorak ascending to godhood, Zaros' banishment and the beginning of the end of the Zarosian Empire.

Many of the Mahjarrat took part in the following God Wars either fighting for Zamorak or remaining loyal to Zaros. Azzanadra is a particularly important loyalist of the latter, who was locked inside the Jaldraocht Pyramid by a Zamorakian and Saradominist alliance.

Little is known of how many Mahjarrat were left by the time of the God Wars, but as of the Fifth Age only a handful of known Mahjarrat remain, many of them in hiding or imprisonment, with most knowledge about them faded into obscurity.

Akthanakos is a Zarosian Mahjarrat. He was imprisoned and trapped in the form of a boneguard for millennia by his rival Enakhra. He was eventually rescued by an adventurer in year 169 of the Fifth Age. He is particularly known for sometimes appearing with a camel's head similar to the members of the Menaphite Pantheon, who were also depicted as humans with animal heads. The Ugthanki camels of the Kharidian Desert are named after him.

Azzanadra is a very powerful and devout Zarosian Mahjarrat who remained loyal to Zaros after his assasination. Azzanadra took part in the God Wars to protect the loyal and punish the traitors and enemies of Zaros. Being considered an unstoppable force, it took a combined effort of Zamorakians and Saradominists to overpower him, and lock him up in the Jaldraocht Pyramid, where he remained until year 169 of the Fifth Age, where he was released by an adventurer.

Enakhra is a Zamorakian and the only known surviving female Mahjarrat. Enakhra had feelings for Zamorak and built a temple in his honour in the distant Kharidian Desert. When she showed it to Zamorak, he was uninterested and more interested in a weapon, that could kill a god. Saddened by Zamorak's rejection, Enakhra remained in the temple and did not come out. At some point, she managed to lure her rival Akthanakos to her temple, where she trapped him as a boneguard. Many years later a crusade of knights from Avarrocka came to kill her, but she easily overpowered them and trapped the only survivor in the temple. Years later a Zamorakian mage and an adventurer uncovered the temple that had disappeared into the sand. Enakhra's hold over Akthanakos was broken, and they both left the temple for the North.

Hazeel is a Zamorakian Mahjarrat warlord. Hazeel was one of Zamorak's closest allies and participated in the betrayal of Zaros and the following God Wars. In the Fourth Age, Hazeel established a Zamorakian state in what is today central Kandarin, with Hazeel ruling the place that would eventually become Ardougne. In the early years of the Fifth Age a Saradominist resistance led by the ancestor of the Carnillean family managed to sneak into Hazeel's mansion and kill him. However, being a Mahjarrat, Hazeel proved difficult to kill and he entered a state of torpor, from which he was unable to wake up. Hazeel's body was hidden by the Cult of Hazeel in the sewers outside the city, where they tried to awaken him. In the year 169 of the Fifth Age an adventurer either foiled the attempt to resurrect Hazeel, or helped in restoring him.

General Khazard is a Zamorakian Mahjarrat judging by his preparations for the 'ritual' with other Mahjarrat, although his followers think him an undead human maniac. He is currently involved in a conflict with the gnomes of the Tree Gnome Village. He's also running the Fight Arena in the centre of his camp, where kidnap victims and slaves are pitted against dangerous monsters. After capturing the nobleman Justin Servil and his son Sammy, an adventurer faced Khazard's monsters and Khazard himself in order to free them. Khazard would later try to get revenge on the adventurer by luring them into a trap, but this plan also failed. He wields some power in the Shadow Realm.

Lucien is a Zamorakian Mahjarrat and necromancer. Lucien was responsible for an infamous attack on Varrock in Year 154 of the Fifth Age, where he attempted to invade the city with an army of undead. The city was prepared with a sufficient amount of runes and the invasion was surprisingly quickly ended. After his failure, Lucien decided to seek out the powerful artefact the Staff of Armadyl to increase his power, he asked an adventurer to infiltrate the Temple of Ikov to retrieve the staff. The adventurer either brought the staff back to Lucien or allied with the Guardians of Armadyl and struck Lucien down. He has hired the treasure hunter Movario in order to find artefacts of power for him.

Sliske is a devious Zarosian Mahjarrat described as the 'serpent-tongued' and delving in the shadows. Sliske was responsible for giving the Barrows brothers their powers and equipment, he followed the Saradominist brothers on their crusade into Morytania to liberate the land from Lord Drakan. They were formidable warriors and pushed through Drakan's lands until they reached the walls of Meiyerditch, where Sliske removed their powers and thus the brothers were slaughtered and the crusade failed. Sliske raised the brothers from their burial tombs as undead wights, claiming them as servants of Zaros. He also tricked Ashuelot Reis into releasing Nex from the Ancient Prison.

Zamorak is the god of chaos and ascended from Mahjarrat to divinity by stabbing his master Zaros with the Staff of Armadyl. Zamorak was a great general in the Zarosian Army and skilled in melee combat, but not so much magic. Having been in Zaros' service for many years, Zamorak began to grow dissatisfied and began to plot a rebellion with other Mahjarrat and high-ranking members of Zarosian society. When Zamorak was brought the mythical Staff of Armadyl, he and his accomplices launched their attack, which led to Zaros' fall and eventually the God Wars, a long series of conflicts lasting about four thousand years. Zamorak was eventually banished from Gielinor by Guthix, who awoke and established the Edicts of Guthix to keep all gods of noteworthy power away.

Zemouregal is a Zamorakian Mahjarrat, a necromancer and the infamous enemy of Avarrocka (current day Varrock). He was one of the Mahjarrat who decided to rebel along with Zamorak. Zemouregal is particularly skilled in necromancy and attempted to lay siege on Varrock with an army of undead in the Fourth Age, but was fought off by the legendary hero Arrav and his magic shield. Although his invasion failed Zemoregal succeeded in killing Arrav and resurrected him as an undead slave, intending to use him in a future scheme.