Making History is a quest about the restoration of the outpost north of West Ardougne and preventing it from being destroyed. During the quest, major parts of Kandarin's history are revealed.

Talk to Jorral in the outpost just north-west of West Ardougne. It is directly south of the Tree Gnome Stronghold (One can use a Necklace of passage and teleport to The Outpost). In order to save the outpost from King Lathas, the player will need to talk to Erin the silver merchant, Droalak the ghost, and Dron the warrior. They can be visited in any order, and the player does not need to revisit Jorral until they've met all characters. Before all of this, Jorral takes you into a cutscene.

Note: If the door is open when talking to Jorral, occasionally an aggressive hobgoblin can attack you during the cutscene, which will cancel the dialogue afterwards and force you to watch the cutscene again.

Items needed: Spade.
The location to dig for the chest.

Note: Erin won't talk to you if you've recently stolen from his stall.

Talk to Erin, the Silver merchant, in East Ardougne. He is at the north-western stall in the central market. He will tell you about his great grandfather, and that he has an enchanted key. Ask him if you can borrow it and he will agree. The key changes temperature as you walk.

Teleport to Castle Wars (ring of dueling or minigames teleport) and cross both of the bridges to the north until you are around 4 steps north from the east side of the second bridge. As soon as you feel that the enchanted key is steaming, take out your spade and dig to find a chest. Use the enchanted key to open it and you will find a Journal.

Travel to Port Phasmatys; if Ghosts Ahoy has not been completed, you must pay two ecto-tokens to the town guards. (Get ecto-tokens by using the bones in the bone grinder on the floor above, slime from the trapdoor west of the fountain, and use those items on the fountain. Then, talk to a ghost disciple to claim your ecto-tokens.) The port can also be reached by Charter Ship to Port Phasmatys or use fairy ring ALQ (Note: fairy ring still requires ecto-token).

After giving Melina the amulet, the player must go back to Droalak to receive the scroll.

Go to Rellekka (players can use fairy ring code AJR to reach the nearby slayer dungeon or Fremennik sea boots to teleport.) Talk to Dron's brother, Blanin (he can be found near the Dairy churn, east of the Longhall).

Go north of Skulgrimen's Battle Gear, and speak to Dron. He can be found close to the northern-most dock. He will quiz the player on the information that Blanin gave them. Dron will ask various questions; these are the answers (in the order used):

Dron will immediately end the conversation if a wrong answer is given.

After answering the questions, Dron will reveal part of the outpost's history that involves two friends battling each other at the Outpost. One sided with Zamorak, and the other sided with Saradomin. It's later learned that they both decided to stand down after observing the destruction of the battle, and chose to side with Guthix. As time went on, one became King of Ardougne and the other ran the Ardougne marketplace.

Back to Jorral[edit | edit source]

Give everything to Jorral. He'll give the player a letter to take to the king of East Ardougne. King Lathas can be found upstairs in his castle in central Ardougne just across the river. He will give back a letter to take to Jorral, in which he promises not to tear down the outpost. After taking it to Jorral, Jorral will make a museum out of the Outpost. 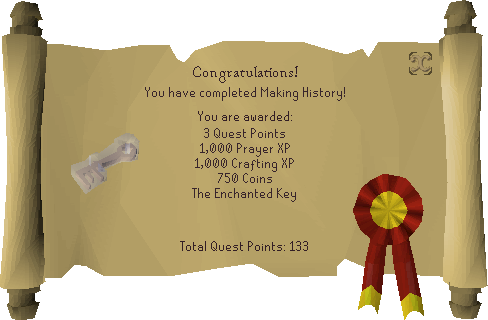 Completion of Making History is required for the following: