Malak is a vampyre noble who can be found in the Hair of the Dog Inn in Canifis. He is fairly haughty and cunning and has a very low opinion of the village's inhabitants, whom he calls 'filthy wolfen folk' and plainly 'idiots', whilst Canifis itself he describes as a 'pathetic excuse for a village' and a 'wolfen cesspit.'

Being one of the four guardians of the Diamonds of Azzanadra, he plays an important role in the quest Desert Treasure.

Malak's origins are unknown, but he is known to be old and of high standing in Lord Drakan's court.[1] Indeed, he is familiar with the smell of Count Draynor, who was exiled from Morytania in the Fourth Age. He also has knowledge of Charos and his ring, being immune to its effects.[2]

At the end of the God Wars, the Mahjarrat Azzanadra, leader of the remaining Zarosians, was imprisoned in Jaldraocht Pyramid in the Kharidian Desert.[3] His essence was bound to four diamonds representing the ancient elements to keep him contained.[4] These four diamonds were eventually taken by Zamorakian warriors for safekeeping to ensure that the Champion of Zaros would not be able to escape.[5]

Malak appropriately came to possess the blood diamond, either being one of the original four warriors or having obtained it in a different manner. In the former case, it is likely that he absorbed some of its energy, becoming more powerful in the process.[6] However, the warriors who took the diamonds are explicitly described as Zamorakians, whereas Malak's is known to have described an avid worshipper of Zamorak as a 'moron'. Moreover, he refers to the diamond as a 'precious little bauble' of little value to himself. 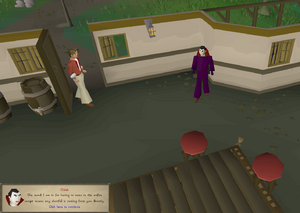 Malak comes to Canifis in lieu of Gadderanks, to his great personal distaste.

At some point in 169 of the Fifth Age, Malak went to Canifis to collect the blood tithes, unable to find Gadderanks, who normally performed this duty. Whilst demanding the tithes from Roavar at the Hair of the Dog, he noticed a human adventurer who was collecting the four Diamonds of Azzanadra. He immediately recognised them as human and demanded to know why they were in Canifis, threatening to bring them to Lord Drakan and sensing that they had slain his brother Draynor. The adventurer revealed their intentions to obtain the diamond. Sensing an opportunity, the vampyre informed them that Dessous, a rival vampyre noble, was the owner of the diamond and offered to teach them how to kill him, which they accepted. In truth, however, he desired to take possession of Dessous's land (describing his rival as a 'frail and decrepit example of our species') without being implicated in his death. Malak instructed the adventurer to have Draynor's assistant Ruantun smith them a silver pot, get it blessed by the High Priest of Entrana, add some fresh blood, crushed garlic and spices and then use it to lure Dessous out of his tomb.

The adventurer did so, albeit with the painful realisation that Malak used their own blood. They successfully slew Dessous in his graveyard, but were shocked to realise he did not have the diamond. Returning to Malak, they were informed that Malak himself owned the diamond. Sealing the deal, the vampyre lord handed the diamond over to the adventurer but confiscated the silver pot, warning them that they were lucky to be left alive and that he would take them to Lord Drakan should they meet again.