Malumac's journal is a journal that can be found by searching a skeleton in the south-west corner of the Karamjan Temple found in the Kharazi Jungle.

The journal, written by Malumac, a member of an elite expeditionary group led by Skotizo and operating under Zamorak's direct orders, details the group's goal to retrieve a powerful artefact in an underground temple beneath the Kharazi Jungle.

If lost, it can be reclaimed from Malumac's corpse, or from a bookcase within a player-owned house. 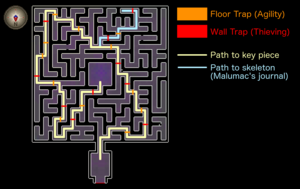 The path to find the journal.

The following text is transcluded from Transcript:Malumac's journal.

It would appear that our cunning at the Battle of Carrallanger[sic] has not gone unnoticed. Impressed by our work, Zamorak himself has personally given us our next mission. For our lord himself to give out a mission is rare, it is clear that this is something of great importance to him. There is an air of excitement amongst the group, I even think I saw the general smiling earlier. It's not hard to see why, if we succeed in this task, we will become some of Zamorak's most trusted. The general does not want to waste any time, we depart for Karamja tomorrow. He aims to have the job done within a week.

Travelling through a world at war is no simple task, even for us. As such, it has taken us a couple of days to reach Karamja. We now begin our search of the island. The information provided was vague, but Zamorak believed we would find the temple on the southern part of the island. I never did ask about the source of Zamorak's information but I doubt he would have answered anyway. Zamorak plays his cards close to his chest, likely looking to avoid failing into the trap that he himself sprung on his predecessor.

It took another day of searching but we think we've found it. The architecture is very unique and matches Zamorak's description. It looks like we may face a couple of challenges before the job is done though, the temple takes the form of a maze, one that is protected by numerous traps and guarded by some strange automatons. It's clear that whoever stored the artefact here did not wish for it to be recovered. Unluckily for them, they underestimated the forces of Zamorak. We will not be halted by a few measly traps. Soon we will present the artefact to Zamorak and with it, he will win this war.

This mission means a lot to us, but especially to our general. He has always been a loyal servant to Zamorak but his deeds have often been hidden behind those of the more notable generals, such as Thammaron. This mission could well be what changes that, this is his chance to show Zamorak that he is worthy enough to be one of his most trusted. As much, he has wasted no time. Into the temple he leads us, ahead, the artefact awaits.

We have been betrayed, by none other than our great general. As expected, we reach the artefact with few issues, the defences of this place not enough to stop us. However, that's when our leader revealed his treachery, too late for us to stop it. He took the artefact from its pedestal and turned to face us. Before we could react, he launched a barrage of demonic magic towards us. Many were killed instantly, but I foolishly tried to flee. In my haste, I took a wrong turn and found a myself in one of the traps that littered the maze. I realised too late what had happened and I was unable to stop myself getting hit by it.

This is where it ends for me. Unable to walk, I managed to crawl into one of the dead ends of this infernal maze. Here I am safe from the automations that patrol this place, but alas the damage is already done. My leg is heavily bleeding and I can feel my energy slipping away. Alone and abandoned, I realise none are coming to help. So I sit here and I curse. I curse our great general for his great treachery, for betraying us all. Skotizo! Why have you forsaken us?
Retrieved from ‘https://oldschool.runescape.wiki/w/Malumac%27s_journal?oldid=14073518’
Categories: