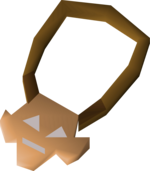 The man speak amulet was an unobtainable item used in an older version of the Evil Bob's Island random event. Players had to take an amulet to speak to the servants upon arrival to ScapeRune. As this feature was confusing to some players it was removed.

The man speak amulet remained in the game cache until 2016. It was deleted as its appearance was reused for the original version of Xeric's talisman.