Managing Miscellania is a repeatable reward/activity resulting from the events of the quest Throne of Miscellania, and expanded upon after Royal Trouble. The player, in charge of Miscellania—and later, Etceteria—assigns the residents of the island to collect specific resources, which are then received by the player. The higher the player's popularity with the citizens, and the more coins invested, the more resources will be acquired.

Because of the valuable resources obtained, Managing Miscellania is considered to be highly profitable. The salaries are paid out every 24 hours, with payment time based upon the time of your last visit.[1]

Due to resources being deposited into the player's bank, ultimate ironmen cannot gain resources by managing the kingdom.

The idea is to manage the island in a way that is most profitable to the player.

Players can control three factors that influence productivity by talking to Advisor Ghrim in Miscellania Castle:

Players can also speak to Advisor Ghrim via the Lunar Magicks spell NPC Contact without having to visit Miscellania, but they can only ask about their approval rating and distribute what the subjects collect. Using the contact spell does not allow players to change the amount of money in the coffers.

Advisor Ghrim talking about your approval ratings in the kingdom.

Players can increase their approval rating by helping the subjects of Miscellania with various skilling tasks. Most of the tasks have a level requirement and may require use of tools. The approval rating will only increase if the subject recognises the player's work by saying "Thanks!". Once the approval rating reaches 100%, the subjects will prevent the player from performing any more tasks. These tasks do yield experience, but the amount is negligible; it is not recommended that players use them to train skills.

Closest maple trees and farming patches for weed raking to the Miscellania Castle.

Rewards are calculated day by day based off the approval of that day, so keep daily approval at 100% for maximum rewards.[2]

The table below outlines the actions that influence approval rating. The player may have to perform up to 5 actions before gaining approval.

Note that while doing an action, each time you stop your percentage will be rounded. For example, each weedy patch can give +3% favour (after completing Royal Trouble) by clicking away after each successful raking.

The coffers is an investment of coins that the player uses to pay the subjects for their work. This can be managed by talking to Advisor Ghrim. The completion of the quest Throne of Miscellania allows for a maximum of 5,000,000 coins or 7,500,000 coins after Royal Trouble in the treasury.

You can also leave more in the coffer so that you do not need to go back to the island daily if you want. If the player deposits the maximum of 5,000,000 or 7,500,000 coins, 90 maximum withdrawals (91 days) will be made without having to add to the coffers. 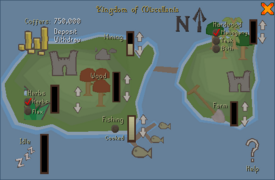 There are 10 subjects (15 after Royal Trouble) available to gather resources. This can be managed by talking to Advisor Ghrim which brings up an interface. Each bar notates a category where you can increase or decrease the number of subjects in that category by clicking the up or down arrows at the right of each bar. Some categories have variants that you can toggle to by clicking on the radio buttons. The subjects can be split any way among the six resource categories, but a maximum of 10 subjects can be assigned to each resource. It is essential to use all the subjects available. You can view how many unused subjects left on the Idle indicator in the bottom left corner of the interface. Suggestions on how to distribute the subjects can be found within the descriptions of each resource below.

Note: The game only records the histories of the coffers and the approval rating. This means that just before claiming the rewards, players can switch the subject distribution, which then applies to the entire period.

There are many different resources that a player can assign their subjects to. Players can put a maximum of 10 workers in one category as indicated with the vertical bars in the interface while talking to Advisor Ghrim. The rewards are all profitable, but do take into account of variations in profit while comparing with different categories and possibly inconsistent extra profit from bonus items such as gems from mining, birds nests from woodcutting, or caskets from fishing/and cooking as listed below. You may also want to factor in the ease of selling the rewards as some resources produce many different items. The table in the Rewards section below shows all the possible rewards.

Herb farming brings in inconsistent but potentially semi-large profit. Players may gain herbs from tarromin to dwarf weed and the most profitable amongst them are grimy ranarr weeds that are used to make prayer potions.

Flax farming brings in very low profit since flax are usually very low in price. It uses the same slot of subjects as herb farming. The bonus items for this resource option include the regular herb seeds between guam and torstol.

Raw fish brings in consistent profit. Players may choose this option to train Cooking without the need to spend time Fishing.

Coal mining brings in consistent profit. Players may choose this option as a good alternative to purchasing coal to train Smithing.

Players will receive gems (sapphire through diamond) as bonus items when choosing this resource.

Maple woodcutting brings in inconsistent but potentially large profit. This is due to the chance of getting bird nests and their contents as bonus items. it is also an option if players need to obtain logs for training Firemaking or Fletching bows without spending the time Woodcutting.

Bird nests are very commonly given as bonuses in quantities of 1 nest per 100 logs cut (if you have 100% working on Maple trees, you will get 892 logs in one day -> 8 nests.) The profits from seeds varies from getting junk seeds to getting very profitable tree seeds like maple seeds, yew seeds, and/or magic seeds. Bird nests themselves can be crushed to obtain Crushed nests which players require for Saradomin brews, and so a steady profit is obtained from these even when the seeds are not valuable.

Both teak woodcutting and mahogany woodcutting provide consistent but usually lesser profit than other consistently profitable resources from mining or fishing/cooking, although mahogany is better than teak. Even if players need planks for Construction, which still requires the cost of the sawmill or the use of Plank Make, they should choose a different option and use the money from that option to purchase logs or planks from other players (unless, of course, they are Ironmen). Players also receive bird's nests from these options but at a severely lower rate (about 1/3) plus fewer logs received compared to maple woodcutting.

Farming has the potential to either be a total waste of gold or bring in heaps of gold on a lucky day. It is a not a recommended option due to the low prices of many of the seeds that are commonly received, although it is possible (but very rare) to get seeds like ranarr (2 on average per day) and torstol (less than 1 every 4 days). Therefore, players who need specific types of seeds are better off choosing a profitable option and using the money to buy seeds. This option should only be chosen if the player needs a diverse collection of seeds.

Farming could be used by Ironmen accounts to gather hop seeds and a variety of other low-level seeds, as opposed to buying from Olivia or stealing from master farmers.

Gathering each item costs a specific amount. The cost your kingdom spends per item are as follows (assuming both quests are completed):

Note: The production cost is a fairly useless figure in itself as it ignores the potential profit that can be made selling the items for the current market value. To see net profits use the calculator instead. 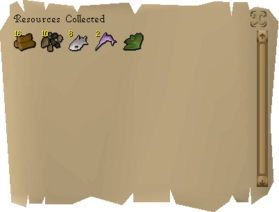 An example of a reward user interface.

Players can collect the rewards by talking to Advisor Ghrim. Because the reward items go directly to the bank and not the inventory, players need to have enough room in their bank in order to collect their rewards.

The table below indicates the maximum daily reward for each resource. It assumes 10 workers on the tasks with an approval rating at 100%, both quests completed and with sufficient funds in the coffers to support the workers at 100%, which is 75,000 coins per day with both quests.

There also seems to be a maximum limit to time you can go without collecting your rewards. This requires not collecting for many months with claims that this limit takes 8-12+ months to reach. This is accompanied by the statement "The storerooms are full, your Highness. You should talk to Advisor Ghrim to collect what we've gathered for you" although it does not appear if you have an approval rating of 100%.

Bug:
If a player teleports while on the "depositing to your bank" part of talking to Advisor Ghrim, after teleporting, the "subject distribution" interface will appear, and players are able to change distribution from their teleport point.