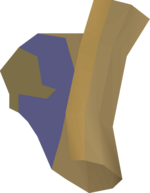 Map scrap refers to one of three quest items found during the Ghosts Ahoy quest. Each one is part of a Treasure map.

Players need to have all three scraps in their inventory, and then use one scrap on another to form the complete Treasure map.

One map part can be found in a chest on the lower level of the Ghost pirate ship wreckage opposite the farm between Frankenstrain's castle and the Ectofuntus and Port Phasmatys. When you open the chest a level 32 Giant lobster will attack you- kill it and search the chest again.

Next, climb up the ladder on the ship and cross the gang plank (to the north) jump from rock to rock in the following order: north, west, west, north, north, west. And open the chest on this last rock, then jump back the way you came to get back to the pirate ship.

Finally Search a chest on the 1st floor[UK]2nd floor[US] of the ghost pirate ship. To open the chest, you need a Chest key.

The key is given to you by the Old man, at the ghost pirate ship, in exchange for a Model ship.

Use it with the other two map pieces to make a Treasure map.