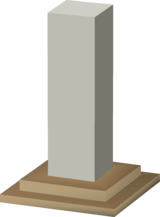 The marble attack stone can be built in the Stone space of the Games room in a player-owned house. It requires 79 Construction to build and when built, it gives 2,000 experience. The player must have a hammer and a saw in their inventory to build it.

The stone does not fight back, so this is similar to the combat dummy/undead combat dummy in the Combat Room without the effect of only hitting the player's current maximum hit. The player does not gain any combat experience while fighting this stone. To set up the stone, the player must right-click and select "Activate". While fighting the stone, it may chip off and deal damage to the player. The player who deals the most damage wins the game.

When a player tries to cast any stat lowering magic spell on the stone, the chat displays "You can't attack this npc."