The Marble gargoyle is a superior variant of the gargoyle. It has a chance of spawning after purchasing the unlock Bigger and Badder for 150 Slayer reward points from any Slayer master.

Unlike most other superior monsters, marble gargoyles use two combat styles: melee and ranged. Both its standard attacks can hit very high, though they are somewhat inaccurate. It is recommended to pray melee. Killing these with a ranged weapon is much easier, as you can pray ranged and negate all damage, excluding the special attack. You will need to carry the range item switches in your inventory while killing normal gargoyles if using this method.

In combat, the marble gargoyle will occasionally launch a grey ball towards the player. If hit by the projectile (magic), it will inflict up to 38 damage and immobilise the player for a few seconds. The message box states "You have been trapped in stone!" when this occurs. Players are able to avoid this attack by moving at least one tile away from their original position once the projectile is launched. 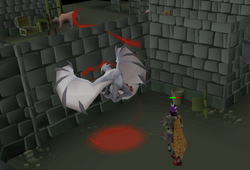